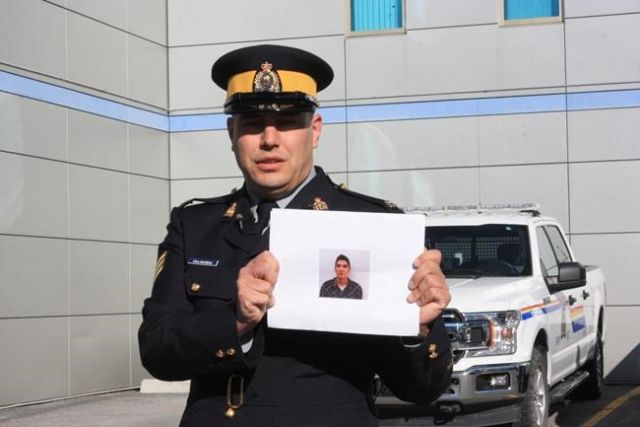 Photo: The Canadian Press
RCMP Sgt. Chris Manseau holds up a photo of Thaddeus McNeely outside of RCMP headquarters in Yellowknife, Thursday, Sept. 22, 2022. Police have identified McNeely, 24, as the lone suspect in a fatal stabbing in Fort Good Hope, N.W.T.

RCMP in the Northwest Territories say the suspect in the stabbing of three people in Fort Good Hope was arrested Thursday evening "without any incident."

One person died in the Tuesday night attack and two others have significant injuries. They remain in hospital in stable condition.

Supt. Jeffrey Christie said 24-year-old Thaddeus McNeely surrendered to police and was arrested at a residence in the community at 5:45 p.m.

"Right now there's no ongoing risk, the RCMP do not feel there's anyone else as a safety risk in the community," he said.

Christie said while police anticipate filing charges, the investigation into the attack and McNeely's whereabouts over the past 48 hours is still ongoing.

"The Northwest Territories RCMP leadership team would like to acknowledge the strong support of community leaders to keep them apprised and work with them through the investigation," he said.

"Their overwhelming show of support to our officers has been deeply appreciated."

Mounties had been going door-to-door in the remote community of about 500 people to speak with residents and potential witnesses.

Police from Alberta and British Columbia were also involved in the investigation.

The RCMP has asked residents with any information about their investigation to contact police.