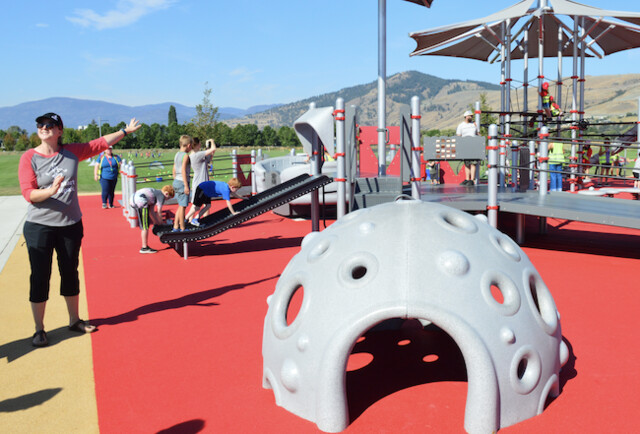 Before the official opening ceremonies, Katlyn Soanes, Regional Manager – Pacific Canadian Tire Jumpstart Charities, gave a tour of the playground, pointing out some of the features.

“It’s a well thought-out playground,” she said, “And it can accommodate kids and adults with mobility and cognitive challenges.”

The playground has a poured-in-place rubber surface that provides different densities depending on what equipment is close by. The ramps are double the usual width and the equipment is transfer-free, so children and adults with mobility challenges can use any of the equipment.

Soanes pointed to the slide, which uses rollers instead of a flat surface.

“Static electricity can build up on a regular slide and it interferes with children with ocular implants,” she said.

In one corner of the playground, three large musical instruments give children a chance to create their own songs.

Soanes pointed out the “risky section” of the playground where more adventurous children can climb, swing and spin the popular We-Go-Round.

The city will maintain and operate the playground.

Scott Fraser, President of Jumpstart Charities referred to the joy of the kids at the playground, saying by the end of the year they would have completed 33 projects across Canada.

Jack D’Amico modestly thanked everyone involved in the project.