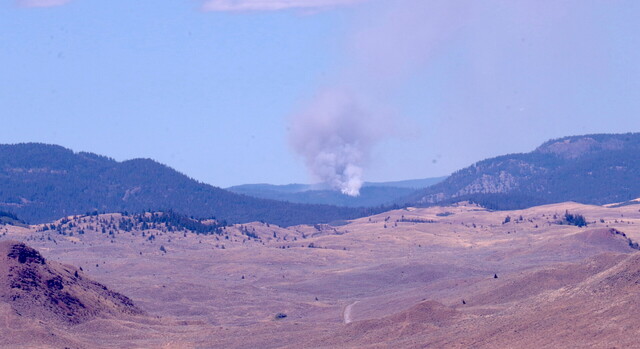 Photo: Kristen Holliday
The East Meadows Plateau fire, as seen from the campus of Thompson Rivers University on Wednesday afternoon.

The East Mountain Plateau fire was reported on Wednesday, when its smoke was very visible from Kamloops. The fire is burning an estimated 20 kilometres to the north of the city, south of Porcupine Meadows provincial park.

“We did have our air tankers on it this morning, as well as two helicopters throughout the day and then 29 ground personnel, as well, who are working to establish a guard with some heavy machinery.”

No structures are threatened at this time.

The East Meadows Plateau fire, burning an estimated 20 kilometres north of Kamloops, is now estimated at seven hectares in size.

According to BC Wildfire Service fire information officer Aydan Coray, the fire is still classified as out of control.

“There's currently two helicopters and 29 personnel on site and I believe the skimmers are working that one this morning and throughout the day as well,” Coray said.

BCWS previously said the blaze is unrelated to the Watching Creek fire, which is now under control but had been burning northwest of the new fire in recent weeks.