Less than 500 are now without power in West Kelowna 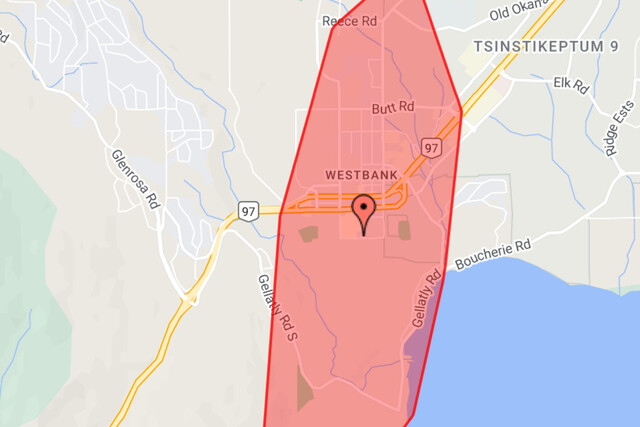 Power has now been restored in West Kelowna.

The remaining 496 customers had their power returned shortly after 11 a.m.

According to crews on the scene, power was knocked out about 9:18 Thursday morning after birds contacted hydro lines.

The original outage affected 2,914 customers, including all of downtown West Kelowna.

BC Hydro crews have determined what caused the power to go off for more than 2,900 customers Thursday morning.

According to the BC Hydro website, the power was knocked out after birds contacted some wires.

Power for most of those affected has already been restored. Hydro says the remaining 496 affected customers should have their power back soon.

Power has now been restored to all but about 500 customers in West Kelowna.

Those without power are in the Gellatly Road area south of Boucherie Road.

The exact area is east of Gellatly Road and south of Ingram Road.

BC Hydro spokesman Dag Sharman says crews on the scene have yet to determine an exact cause of the outage, but says they have been able to reconfigure the system to allow for the restoration of power for most of the 2,900 originally affected.

Sharman says it could be an hour before the rest of the power is restored.

BC Hydro spokesman Dag Sharman says crews have not yet determined the cause of the outage that has knocked out power to more than 2,900 customers in West Kelowna.

Sharman tells Castanet News crews are at the scene trying to determine what knocked the power out.

An estimated time of reconnection has not yet been determined.

Power to a large area of the region including all of downtown West Kelowna, went out about 9:18 this morning.

More than 2,900 West Kelowna customers are without power this morning.

According to BC Hydro, power went out across a large portion of the city at about 9:18 a.m. Thursday.

The outage affects an area west of Wetton Road, South of Saddleback Place and east of Highway 97.

The entire downtown core is affected by the outage.

There's no indication as to what caused the outage or when the power will be restored.