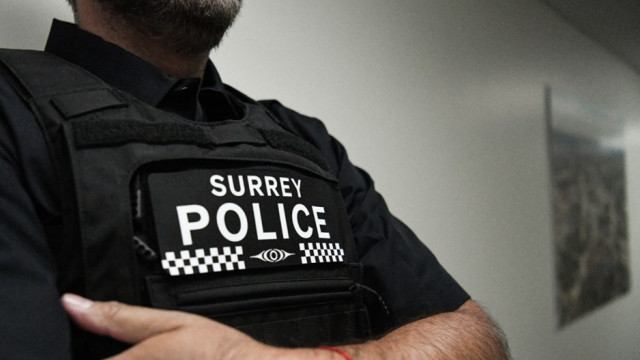 Photo: BIV files.
The officer was hired by the Surrey Police Service with just over one year of policing experience.

A Surrey Police Service officer hired in May was arrested Tuesday by the Surrey RCMP for breach of trust.

Surrey Police Chief Norm Lipinski, who did not name the officer, confirmed that the officer was released on conditions, pending further investigation.

“The SPS officer is facing a charge for an alleged breach of trust, however the charge has not yet been approved by BC Prosecution Service,” said a statement from Lipinski. “SPS has notified the Office of the Police Complaint Commissioner about the incident.”

The statement said the officer was hired by SPS with just over one year of policing experience. Lipinski announced he had suspended the officer with pay, pending outcome of the Surrey RCMP probe.

In June, the BC Prosecution Service announced charges of breach of trust and fraud against Surrey RCMP Cpl. Peter Leckie for offences from 2014 to 2020. He is accused of obtaining information from police databases about women for the purpose of engaging in intimate relationships.