Smoke from new fire north of Kamloops visible from some neighbourhoods 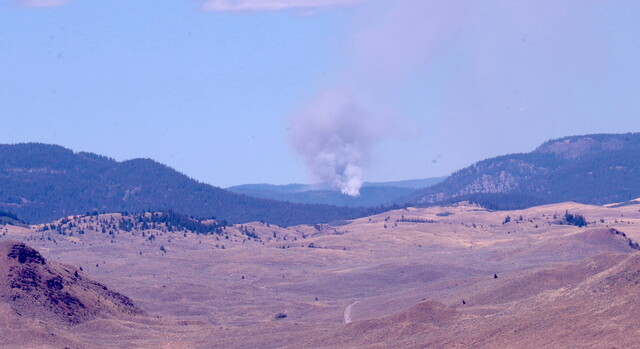 Photo: Kristen Holliday
The East Meadows Plateau fire, as seen from the campus of Thompson Rivers University on Wednesday afternoon.

The East Meadows Plateau fire is burning an estimated 20 kilometres north of Kamloops, according to the BC Wildfire Service.

Smoke from the fire is visible from most of Kamloops.

“The fire is estimated to be three hectares and displaying Rank 2 and 3 behaviour, meaning a surface fire with visible flame and slow to moderate rate of spread,” BCWS said in an update posted online.

“There are currently two helicopters on site, with nine ground personnel and air tankers en route.”

BCWS said the blaze is unrelated to the Watching Creek fire, which is now under control but had been burning northwest of the new fire in recent weeks.

BC Wildfire Service crews are responding to a new fire north of Kamloops, smoke from which is visible from parts of the city.