Keremeos Creek wildfire evacuees can go home, but fire season far from over

Just 20 properties in the Regional District of Okanagan Similkameen remain under evacuation alert Wednesday due to the Keremeos Creek wildfire, and all orders have been lifted.

One structure was lost when the fire began in late July, and at its peak, more than 540 residences were evacuated, including the entire communities of Olalla and Apex Mountain Village. Highway 3A was closed for multiple days as the fire impacted both sides of the road.

But no more homes were lost, and no lives.

Incident commander with BCWS Hugh Murdoch said a lot of factors led to that success in reducing the impact on humans of this wildfire, even as it raged out of control.

"First and foremost, the efforts of people fighting the fire on the ground. And in the air, and heavy equipment operators, clearly made a difference," Murdoch said Wednesday.

"I would suggest also that a a wet spring and wet parts of the early part of the summer as well had an impact on the receptiveness of the forest fuels at higher elevations. While we've had a lot of hot weather recently, the impact of that prolonged wet spring and early summer is something that's proven to be quite helpful on this fire and on other fires across the Interior."

The cause of the wildfire remains under investigation.

As residents return home after more than two weeks away from their residences, elected regional district directors have expressed their gratitude to the local and BCWS crews that kept their communities safe.

"This fire could have been very devastating as mentioned and because we have such a great volunteer commitment from all all involved, so I appreciate the volunteers and staff from BC Wildfire that were able to help out," said Subrina Monteith, Area I (Apex Mountain/Kaleden) director.

"And I'm thankful that we were the only major fire going on at the time because we didn't have the resources. So in some ways it was sort of a perfect storm — one I didn't want to have and I'm sure residents didn't either. So I'm thankful that we did come out of this, as good as we could be."

"It's time to recognize the patience and the resilience of the residents of our communities that pulled together, it was a difficult and challenging time," Roberts said.

In total there have been 846 registrations with Emergency Support Services associated with this wildfire to date.

But Murdoch wants to remind the public that fire season is not over, nor is the fight against this particular blaze. Some wildfires may pop up unexpectedly, having smouldered for days after storm events.

"Some of these fires are what we call holdover fires from lightning. There has been a lot of lightning in these parts and in the Southern Interior," Murdoch said.

"So [BC Wildfire Service] continues to pick up new fires that have been burning for some period of time under pretty challenging conditions. And there's been a lot of focus on these large fires that we're doing very well on. But I don't want to lose sight of the fact that there's been dozens and dozens of new starts that are getting to be more and more challenging as well."

For a full list of evacuation alerts within the RDOS and helpful links for evacuees returning home, click here.

Watch live above as the RDOS and BC Wildfire Service provides an update on the Keremeos Creek wildfire.

The latest news is that all evacuation orders have been rescinded as of 2 p.m. Wednesday.

BC Wildfire crews are satisfied the properties are protected from the wildfire at this time.

The Keremeos Creek wildfire continues to burn but crews are making good progress on containing portions near homes and roadways, and most under evacuation order have returned home.

The fire is just under 7,000 hectares in size. As of Wednesday morning's BC Wildfire Service update, the fire is currently stable along the western side of Highway 3A.

The Regional District of Okanagan Similkameen lifted evacuation orders for Apex Mountain Village Tuesday, and is expected to give a further update on remaining evacuation orders and alerts at 2 p.m. Wednesday. Castanet will carry that news conference live in this story.

BCWS says there will be increased fire behaviour in the northwest and southwest corners of the fire Wednesday due to higher temperatures and lower humidity. Communities in the southwest can expect to see increased smoke due to planned aerial ignitions.

"Smoke appearing from well within the fire perimeter and burned material is common, and smoke will continue to be visible until there is significant rainfall over the fire," reads the BCWS update.

"However, smoke that rises from green, unburned fuel or from outside of fire's perimeter should be reported. To report a wildfire or open burning violation, call 1 800 663-5555 toll-free or *5555 on a cellphone."

Currently on site are 272 firefighters, 10 structure protection personnel, a liaison from Lower Similkameen Indian Band, 14 helicopters and 22 pieces of heavy equipment. Resources are being shared between the Keremeos Creek and Richter Mountain wildfires.

As of Wednesday at 12:30 p.m., 25 properties on Sheep Creek Road, Highway 3A and Green Mountain Road remain under evacuation order. 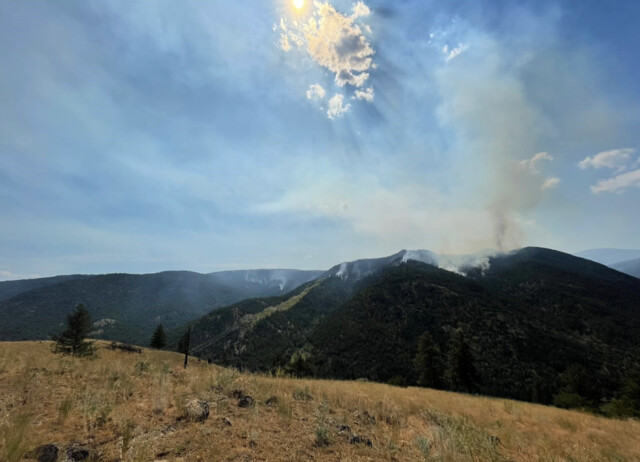