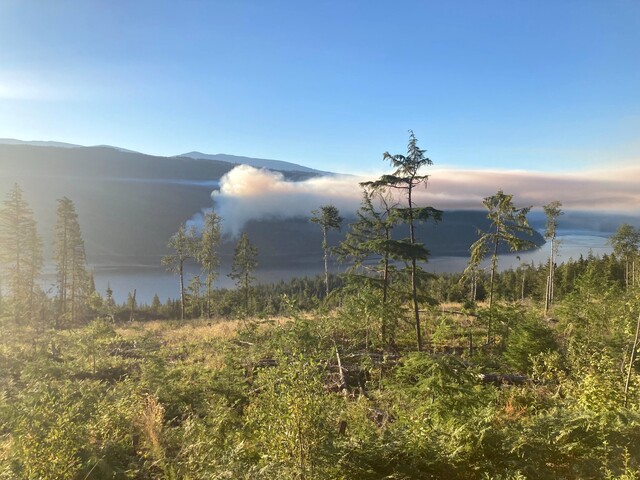 The Columbia Shuswap Regional District has issued an evacuation alert for five properties due to the Mount Grice-Hutchinson wildfire.

The four-hectare blaze was discovered on Tuesday, and is burning on the east side of Seymour Arm.

The CSRD said the evacuation alert is in place for five boat-in cabin dwellings within Electoral Area F.

“The threat of a wildfire near the Mount Grice-Hutchinson Declivity, southwest of Seymour Arm in Electoral Area F is increasing and may pose a risk,” said a statement from the CSRD.

The CSRD said residents in the area impacted by the alert should locate grab-and-go bags for their household, and gather essential items in case an evacuation is necessary.

Residents should keep family members and pets close at hand, and arrange transportation to Sicamous Seniors Centre — located at 151 Shuswap Avenue in Sicamous — should an evacuation be required.

“An evacuation alert is a warning about a potential threat to life and/or property. It is intended to give you time to be ready for a possible evacuation,” the statement said.

“Residents will be given as much advance notice as possible prior to evacuation, however you may receive limited notice due to changing conditions.”

More information about the evacuation alert can be found on the CSRD website.

An Evacuation Alert has been issued for five boat-in only cabin dwellings in the Mt. Grice-Hutchinson Declivity within Electoral Area F. See https://t.co/tA3FALdk01 https://t.co/7sYAoBeuEo pic.twitter.com/wrtkK1i8iL

BC Wildfire Service crews are responding to a blaze Wednesday on the shores of Shuswap Lake.

The Mount Grice-Hutchinson wildfire is burning on the east side of Seymour Arm, approximately 20 kilometres south of the community of Seymour Arm in the North Shuswap.

“There is no road access to this area so crews will be rappelling from a helicopter, landing at a helipad or boating across Shuswap Lake to get on site,” BCWS said in an update posted online.

“Firefighters will be supported by four helicopters who will be using Shuswap Lake as a water source. Please stay clear of this area for your own safety, the safety of our personnel and to avoid interfering with operations.”

BCWS said the fire is burning in heavy timber on a steep west-facing slope. The fire was discovered on Tuesday.

Fire activity is expected to increase in the heat of the day this afternoon.