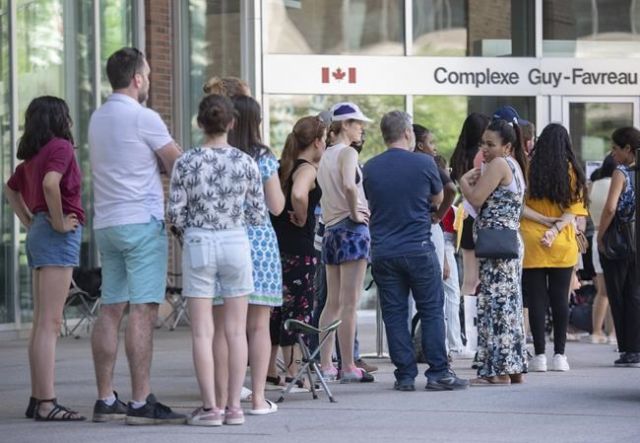 Photo: The Canadian Press
The federal government is adding new passport service locations across Canada as a loud backlash over long wait times continues. People line up outside the Guy Favreau federal building while waiting to apply for a passport in Montreal, Sunday, June 26, 2022. THE CANADIAN PRESS/Graham Hughes

The federal government is adding new passport service locations across Canada as a backlog in processing applications continues.

Nearly 1.1 million applications for new and renewed passports have been filed since April as pandemic restrictions loosen and Canadians resume travelling.

More than one-quarter of those hadn't yet been processed as of early this month.

But a large backlog remains.

In the first week of August, the number of passports issued within 40 business days of an application fell to 72 per cent from 81 per cent the week before.

Those numbers aren't materially better than the topline figures for late June, when Prime Minister Justin Trudeau was forced to respond to growing complaints and called the system's performance "unacceptable."

The week of June 20, the percentage of passports being issued within 40 business days was 76 per cent.

Call centre wait times have gone down significantly in the interim and "triage measures" were implemented at 17 passport offices to mitigate in-person headaches.

Still, delays remain as walk-ins at most offices are limited and many Canadians wait weeks or months before being able to get an appointment.

Urgent services for people who can prove they need a passport within 48 hours are only available in bigger urban centres — Toronto, Montreal, Vancouver, Calgary, Edmonton, Gatineau and Quebec City.

Proof of upcoming travel is also required to get service within two months at offices with 10-day processing times, including those announced Wednesday.

As the backlash over the wait times continues, some reports suggest Canadians are making "fake" travel plans to show to passport officers, then cancelling their flights once their application is in the queue.

Passports from in-person applications are issued within the 10-day period 95 per cent of the time, a standard that has remained steady throughout the summer.

Gould said the government failed to predict to what extent demand would sharply spike earlier this year and wasn't prepared for a glut of mailed applications.

For passport requests sent by post, a government website currently predicts a wait of 13 weeks, plus mail time.

Since the end of July, people who have waited more than 20 business days for a mail application and who are travelling within the next 20 business days can visit Service Canada offices to ask for a transfer, making it more likely they'll get their application processed before they need to leave.

In response to demand, Service Canada added five new locations for passport services in late July: Brampton and Whitby in Ontario, Pointe-Claire in Quebec, Calgary Sundance in Alberta and Richmond in British Columbia.

The agency also ramped up staffing levels, reporting 1,936 employees in its passport workforce in early August, up from 1,785 a month earlier.

Gould said she is working on bringing passport services to nine or 10 additional offices and hopes to make more announcements soon.