Reporting bad driving on 5A 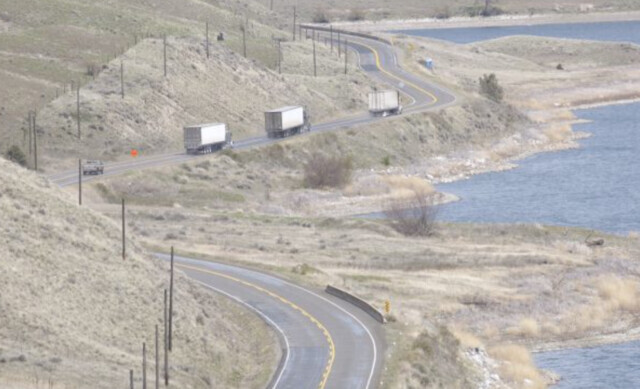 Photo: File photo
A stretch of commercial truck traffic along Highway 5A.

Some residents living along Highway 5A have created a Facebook group to report dangerous driving from truck drivers as a push have the province ban commercial traffic on the highway continues.

"What we're doing is shifting the focus now to the truckers and the trucking companies responsible for these many crashes on 5A that occur weekly,” Price said.

Price said he is encouraging residents to post videos and photos of commercial vehicles they see engaging in dangerous behaviour, which will be collected and sent to officials.

“When we see and when we get evidence of just blatant disregard for traffic safety laws, we're going to be forwarding that information to the RCMP and to CVSE — Commercial Vehicle Safety Enforcement — to act as they deem fit,” Price said, adding that CVSE officials have been doing a “terrific job” enforcing as much as they can.

“Bottom line is, the bad driving isn't going away. So we're serving notice that we've got eyes on the road, and we’re taking this to that next step,” Price said.

Stump Lake Ranch and others from the area, including the Upper Nicola Band, have been pressing the B.C. government to consider enforcing a non-local commercial truck ban on Highway 5A.

Price said Highway 5A has two lanes and no shoulder space, but the Coquihalla Highway, which runs parallel to the roadway, has four to six lanes and can better accommodate heavy truck traffic.

“The B.C. government, to this point, has not moved on the issue. And yet, the truck crashes are continuing. So the bottom line is, for us, safety. And so we need to keep doing something,” Price said.

In an email to Castanet, a spokesperson from the provincial Ministry of Transportation and Infrastructure said CVSE frequently patrols Highway 5A in marked and unmarked vehicles.

“The ministry’s Commercial Vehicle and Safety Enforcement Branch is committed to ensuring that commercial trucks operating on our provincial highways meet all safety requirements,” the statement said.

The ministry said all complaints about commercial vehicles being driven unsafely — or in unsafe condition — are taken seriously, and can be reported to CVSE by phone or by email.

Last year, representatives from Stump Lake Ranch and the Upper Nicola Band commissioned an engineering study on the highway’s safety and operational performance.

The report found that some of the geometric features of the highway don’t meet Transportation Association of Canada guidelines, and engineers raised concern that there may be too much signage along the route, which can reduce the significance of those warnings.

The report was sent to the Ministry for Transportation and Infrastructure for review.

Price said the ministry commissioned its own study of the route around the time his group was releasing their report findings. The Ministry of Transportation and Infrastructure confirmed a review was completed this spring.

“Based on the ministry-commissioned safety review completed this March and other recent technical reviews of the highway, ministry engineers have determined that Highway 5A meets or exceeds provincial safety, capacity and reliability standards,” the ministry said in its statement.

“To further enhance safety on the highway, the ministry is currently reviewing recommendations for possible signage updates resulting from one of these reviews.”

When asked if the highway reviews would be made public, the ministry said the technical reports are for internal use only.

Price said residents are ultimately concerned about safety, noting that locals will check their watches when they see emergency vehicles drive down Highway 5A, worrying that the school bus is on the road.

“My greatest fear, and it's a fear shared by many of the residents if not all of the residents who live along 5A, that one day one of these truck crashes is going to take out a school bus. And then it's going to be too late to act,” Price said.