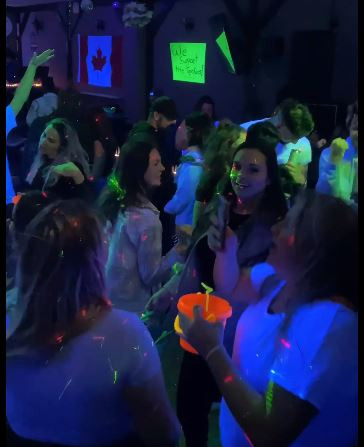 Photo: From Facebook.
A Facebook posting from February showing Lambda Cabaret open for business in defiance of an order to close from Northern Health.

A Prince George nightclub has been issued a week-long suspension for defying provincial health orders to close back in February.

In a decision issued August 3, a B.C. Liquor and Cannabis Regulation Branch delegate said the licence held by Learn to Earn Bartending School and Consulting Ltd. for Lambda Cabaret, now known as Club 1177, will be suspended for seven days starting from the close of business on Wed., Aug. 31.

"Signs satisfactory to the (LCRB) general manager notifying the public that the licence is suspended will be placed in a prominent location in the establishment by a branch inspector or a police officer, and must remain in place during the period of suspension," the delegate said in the decision.

Beginning in early February and at about the same the Freedom Convoy converged on Ottawa and a large rally in its support was held at Exhibition Park in Prince George, Lambda opened for business in defiance of a provincial health order.

A closure order issued on Feb. 9 by Northern Health was rescinded eight days later when liquor primary premises were allowed to reopen but another one was issued two days later after Northern Health inspectors observed security guards admitting patrons without requesting proof of vaccination.

Coinciding with the Northern Health orders, the LCRB suspended the nightspot's liquor licence.

"The branch subsequently learned that the licensee had continued to operate and serve liquor during the period of licence suspension," the delegate said in the decision and went on to say the allegation was confirmed by postings on social media by Lambda's principal owner, Linda Allen.

A pre-hearing conference on the matter had originally been set for April 28 but was postponed at request of the licensee. Several attempts to reschedule were met with no response, according to the delegate, and when one was unilaterally scheduled to proceed on May 26, neither Allen nor her counsel showed up.

As such, on May 27, they were both advised the matter would proceed by way of written submissions, were provided with the branch’s documents and given 14 days to provide a response. No response was received, the delegate said.

Allen also delayed responding to requests to forward sales receipts for the days in question. Once provided, the documents confirmed the nightspot was operating on those dates, the delegate said.

Given no record of a contravention by the licensee within the preceding two years of the incident, the penalties ranged from a seven to 11-day suspension and or a fine of $7,000 to $11,000.

Noting the defendant did not indicate a preference between a suspension or a fine, the delegate settled on the suspension, noting that the licensee continued to operate in February despite the suspension.

"Failure to comply promptly with a demand made by the branch is a serious matter as it may involve issues of public safety. In the circumstances, I find that a license suspension is more appropriate than a monetary penalty," the delegate reasoned.

Located at 1177 Third Avenue, it's now known as Club 1177 although consistently referred to as Lambda Cabaret throughout the decision. Allen turned the nightspot to new management in mid-July according to a posting on the Club 1177 Facebook page.