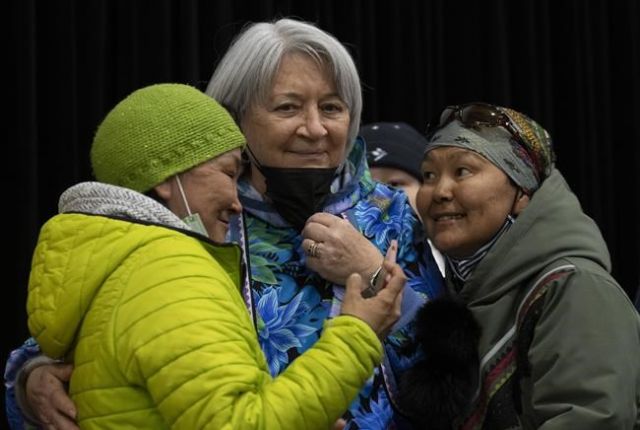 Photo: The Canadian Press
A woman glances up at Governor General Mary Simon after taking a photo together following a community gathering Tuesday, May 10, 2022 in Kangiqsualujjuaq, Que. THE CANADIAN PRESS/Adrian Wyld

Senior civil servants explored offering Indigenous-language training to federal employees and possible exemptions to those who already speak one from requiring fluency in both English and French, newly released documents show.

A memo, released to The Canadian Press under federal access-to-information laws, flagged a "growing tension" between official-language requirements and Indigenous languages.

Under Canada's Official Languages Act, federal institutions must offer working environments for employees to communicate in both French and English, and offer services to Canadians in either language.

As such, communicating in both is expected for senior executives and there are a number of public service jobs where bilingualism is mandatory. There is room, however, for an employee to take classes and learn French or English as a second language.

The memo issued last fall said a working group was held about making changes to the official-language requirements. It said some Indigenous public servants belonging to a network of around 400 who work for the federal government asserted the need for a "blanket exemption."

"My own personal view is there are opportunities for exemption — if the individual speaks an Indigenous language," Gina Wilson, a deputy minister who champions the needs of federal Indigenous public servants, wrote in an email to colleagues last November.

"Our GG (Governor General) is a good example."

Inuk leader Mary Simon's appointment in 2021 sparked a discussion — and some controversy — over bilingualism in Canada's highest offices, given how Simon, the first Indigenous person named as Governor General, spoke English and Inuktitut, but not French.

Simon, who was born in Kangiqsualujjuaq, in the Nunavik region of northern Quebec, said she attended a federal day school and wasn't able to learn French.

She committed to doing so after her appointment and has been taking lessons, delivering some French remarks in public speeches.

Commissioner of official languages Raymond Théberge said more than 1,000 complaints about Simon's lack of French were lodged with his office after Prime Minister Justin Trudeau named her to the role.

Language training has been identified as one of the issues preventing Indigenous employees in the federal public service from advancing in their careers.

A report authored by public servants around the celebration of Canada’s 150th anniversary recommended those who are Indigenous be exempt from official-language requirements and instead be provided with chances to learn the language of their community.

It's unclear if Ottawa plans to move ahead on changes to language requirements, training or exemptions.

A spokeswoman for Crown-Indigenous-Relations and Northern Affairs Canada said both that ministry and Indigenous Services Canada "have no plans to offer department-wide Indigenous language training," noting employees have offered workshops in the past.

It said Indigenous employees are encouraged to talk to their managers about language training.

Crown-Indigenous Relations Minister Marc Miller, an anglophone who speaks French and is learning Mohawk, said in an interview that the idea of an exemption is a sensitive issue.

"Inevitably, when you have to make one of those decisions, it is more often than not, and almost always, at the expense of jettisoning French," said Miller, who represents a riding in Montreal.

"I don't think that's something that most people would find palatable … there are resources to learn it and I think there is the availability to do so."

Ideas included providing more time to learn a second language and even offering Indigenous-language training, including to non-Indigenous public servants, as a show of reconciliation.

"I certainly recall during my French classes having this nagging thought in the back of my mind that I would be so much more open to this if I had the opportunity to be given training in my own Algonquin language," Wilson wrote in her email.

"I had a pretty good base in both, but of course my French is much better than my Algonquin now."

Miller said he supports the idea of Ottawa providing classes, particularly to Indigenous public servants who were not provided the chance to learn these languages for themselves.

He said one challenge to doing so would be making sure Ottawa wasn't taking language teachers away from communities.

"When you look at the fragility of Indigenous languages across the country, you would not want to be in a circumstance where we're taking really valuable assets … people in many circumstances that are quite older, and just walking dictionaries out of their communities where communities are struggling to regain their languages."

The same concern was highlighted by government officials. Both they and Miller said Ottawa faces calls to ensure it provides services to Inuit in Inuktitut.

"We could do better on that," he said.

One change Lori Idlout, Nunavut's federal member of Parliament, said should happen — and which officials also pitch in the memo — is for Ottawa to extend the $800 annual bonus it pays to employees who are bilingual to those who speak an Indigenous language.

The representative says she's been approached by a union about federal employees in Nunavut who speak Inuktitut but are unable to access the compensation because they are not bilingual in French.

"Meanwhile, they're providing valuable services to Inuit in Inuktitut," she said. "It's a huge issue."

Idlout said Nunavut residents face many barriers when it comes to accessing federal services in general, including in Inuktitut.

According to the memo, officials recommend the government explore a pilot in Nunavut where jobs that require they speak Inuktitut "would not require competency in a second official language."