“I was just proud to be able to keep fighting through the elements… like Mother Nature can throw so many things at you and it’s an environmental challenge more than anything, so you’re just hoping the winds are in your direction, which during this one at times they weren't, and you just kind of have to give and take with Mother Nature," he said.

With a never-ending thirst for endurance challenges, Pelletier says giving up was never an option, even through the cold, dark and lonely hours of the night, the young athlete was going to complete the journey one way or another.

“You’re definitely consistently battling and working through, but I think it’s important to know there’s no right way to do it. It’s not like there is a set way to get through it. So whatever you have to tell yourself to get through something like that, as long as you complete it and achieve the goal then it was a success," explained the athlete.

Fighting heavy winds and big waves, Pelletier was forced to add an additional seven kilometres to his ride, making his arrival at the finish line an even bigger accomplishment.

“It’s always kind of surreal when you get there because you’re thinking about the goal for so long while you’re doing it and then all of the sudden it’s done. My friends picked me up and took a video of me trying to stand up because I hadn’t stood up in 35 hours, so my legs were a little wobbly and I had to go to the bathroom pretty bad. I was a bit sunburnt and tired, but super happy and stoked to get this part of the lake done," smiled Pelletier.

Now that the ultra endurance athlete has paddled Okanagan Lake from end to end, he plans to turn things up a notch with an attempt at a solo swim of the 106 kilometre lake. 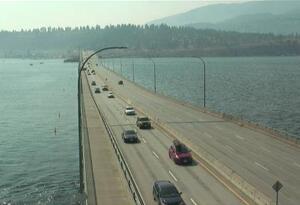