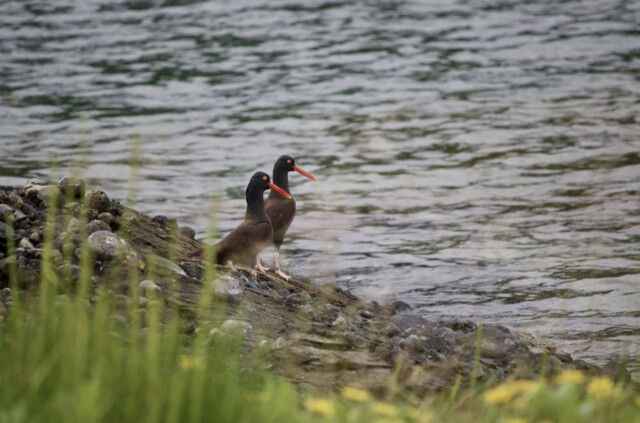 Scientists found what they believe to be the oldest black oystercatcher ever recorded off the coast of Haida Gwaii.

Black oystercatchers live along the Pacific coast from Alaska to California and are a type of shorebird, said Rian Dickson, a biologist at Laskeek Bay Conservation Society, on Aug. 9.

At 27 years old, the bird is healthy, and scientists think it is likely still reproducing since she was found with a chick.

Shorebirds are relatively long-lived compared to other groups such as songbirds. Dickson said that many individual shorebirds have lived into their teens and twenties, and there are two confirmed Eurasian oystercatchers who have lived for more than 40 years.

However, she hasn’t heard of a black oystercatcher older than 27 years.

Laskeek Bay Conservation has been monitoring shorebirds since 1990 and this latest discovery just reinforces the importance of the work, Dickson said.

She sent Dickson the number from the bird’s band and asked if Laskeek Bay Conservation had it listed in their records. Roodenrijs didn’t have the information and didn’t immediately know the bird’s age. She said the band looked different than other ones she had seen.

As it turns out, this particular oystercatcher was banded on June 23, 1995, by Tony Gaston, founder of Laskeek Bay Conservation Society. He tagged it as a chick living on Limestone Island, which is about 50 kilometres as the crow flies from where Roodenrijs found it.

“These birds were banded in the 90s. And then we didn’t know where this bird went. We didn’t know anything about it for the past 27 years. Then we found it just here in front of [Daajing Giids],” Dickson said.

“We didn’t know that oystercatchers would move out of Laskeek Bay and breed elsewhere. [It is] an interesting part of this find as well that an oystercatcher hatched in Laskeek Bay has moved to Skidegate Inlet.”

When Laskeek Bay Conservation Society was established, it primarily focused on ancient murrelets. Over the years, the society’s programs have expanded to include monitoring other species, including the black oystercatcher, which they started observing in 1992.

While some black oystercatchers migrate, part of the population stays year round and they return to the same general breeding spot for a long time, Dickson said. Being local birds is one of the reasons they were selected to study.

The bird species is also very dependent on the intertidal zone, which makes them a good indicator of the health of this ecosystem, Dickson said.

She said that black oystercatcher populations have remained fairly steady since they started monitoring them. Raccoons and rats are the largest threat to the birds, but many of the islands on Laskeek Bay are still free from predators.

Roodenrijs gave the 27-year-old bird, coded U6, a new bright green plastic band that sits on its upper leg above the joint. Each oystercatcher has a unique alphanumerical code on its band.

Citizens can look for the bands on oystercatchers. If they spot one, the conservation encourages them to send an email to [email protected] with the time, date, location and band code. Dickson wanted to remind people to maintain a respectful distance when they are observing wildlife and to use binoculars or a camera with a powerful lens to get a closer look.

Many of Laskeek Bay Conservation Society’s programs are powered by volunteers and they are always looking for more people. For information visit laskeekbay.org.