Release goes smoothly, caribou moms and calves back in wild 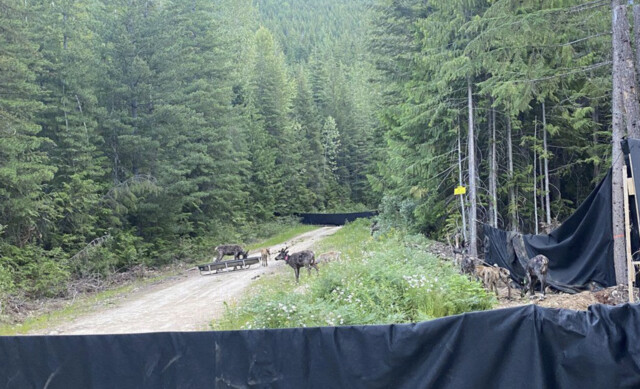 People trying to save an endangered caribou herd are calling this year’s maternity pen experiment a success, and are already looking at ways of improving the project for next year.

On July 22, the Arrow Lakes Caribou Society (ALCS) released seven females and six calves they’ve been keeping secluded and protected in a maternity pen, constructed above the hot springs near Nakusp.

“One by one, the group exited the pen,” states an ALCS news release. “As soon as they were all out of the pen, they quickly realized they could run and found a trail up Raven Creek to travel together. The caribou had left the pen and started travelling up to the alpine by 5:30 am on Friday.”

McLeod says the animals will stay up in the high country until the fall. Then they’ll head to lower elevations, when the snowpack allows them to reach lichen in the trees.

“It's incredible to see the distances and terrain they can cover in a short amount of time, especially the calves,” she says.

The seven pregnant females and one yearling were captured in March, and taken to the 6.6-hectare (16-acre) pen, where they were fed prime caribou fodder and protected from predators. One mother in the pen died of infection after having a stillborn calf. But overall, McLeod says the animals did well.

“The pen facility proved to be an excellent location to house caribou and they seemed to enjoy every inch of the pen,” she says. “Our weight recordings of the caribou throughout penning showed that they all gained weight and had an improved body condition by the time of release.”

But life is still precarious for the Southern Mountain Central Caribou herd, of which less than 30 remain. Using tracking collars, they’ve determined that one calf may have died since its release in July. It’s not known at the moment what happened.

“Cows and calves all have GPS/VHF radio collars for monitoring that show us their locations and tell us if there's a potential mortality (signalled by a lack of movement),” says McLeod. “GPS data shows that all other calves are with their mothers.”

But the true success of the program won’t be known for at least 10 months. That’s when the provincial Caribou Recovery Program, which does the tracking, determines how many of the calves have survived.

Still, the ALCS is considering the project a success this year, and plan some tweaks to improve the females’ stay next year.

“We learned a lot this year,” McLeod says. “We plan to pile even more snow next year since the caribou seemed to really enjoy it, especially when temperatures were high. We're going to hopefully improve our camera monitoring system so we can have more cameras inside the pen in areas that we've learned the caribou like to use; and we'd like to collect extra lichen for next year so we can increase the amount of lichen being fed to the caribou prior to release, to wean them off of the pellet feed a bit.”

McLeod says the shepherds, veterinarians, ALCS and ministry staff all worked very well together to ensure there was clear communication and coordination. And she thanked the community and sponsors for their support in funding the $450,000 program.