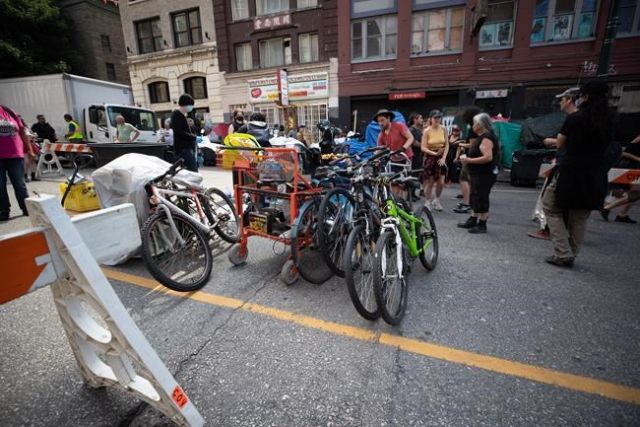 Photo: The Canadian Press
A person's belongings are placed on the street to be moved to storage after his tent was cleared from the sidewalk at a sprawling homeless encampment on East Hastings Street in the Downtown Eastside of Vancouver, on Tuesday, Aug. 9, 2022. THE CANADIAN PRESS/Darryl Dyck

British Columbia's acting attorney general says the province was "clear" with Vancouver officials that the Crown corporation responsible for subsidized housing does not have enough spaces available for people who are being told to dismantle their tents along a street in the city's Downtown Eastside.

Murray Rankin, who is also minister responsible for housing, says housing is a human right, and the "deeply concerning scenes from Hastings Street demonstrate how much more work we have to do to make that a reality for everyone in our communities."

Rankin in a statement Friday says BC Housing has accelerated efforts to secure new housing for encampment residents including pursuing new sites to lease or buy and expediting renovations on single-room occupancy units as they become vacant.

He says BC Housing is aiming to make a "limited number" of renovated units available next week, with more opening later in the fall.

Police blocked traffic Tuesday as city staff began what's expected to be a weeks-long process of dismantling the encampment but little had changed by the end of the week with most residents staying put, saying they have nowhere to go.

The city has said staff plan to approach encampment residents with "respect and sensitivity" to encourage the voluntary removal of their tents and belongings.

Community advocacy groups, including the Vancouver Area of Drug Users and Pivot Legal Society, have said clearing the encampment violates a memorandum of understanding between the city, the B.C. government and Vancouver's park board, because people are being told to move without being offered suitable housing.

The stated aim of the agreement struck last March is to connect unsheltered people to housing and preserve their dignity when dismantling encampments.

The City of Vancouver may enforce bylaws that prohibit structures on sidewalks "when suitable spaces are available for people to move indoors," it reads.

The province is not involved in the fire chief's order or the enforcement of local bylaws, which prohibit structures on sidewalks, but it is "bringing all of BC Housing's resources to bear to do what we can to secure housing for people, Rankin said.

"I recognize the profound uncertainty and upheaval people impacted by the fire order are facing, and we will provide updates on this work as we have news to share," he said.

Rankin, who had been serving as minister of Indigenous relations, was appointed acting attorney general after David Eby stepped down to run for leadership of the B.C. NDP.