Province hands over 2,276 hectares near Campbell River to First Nation 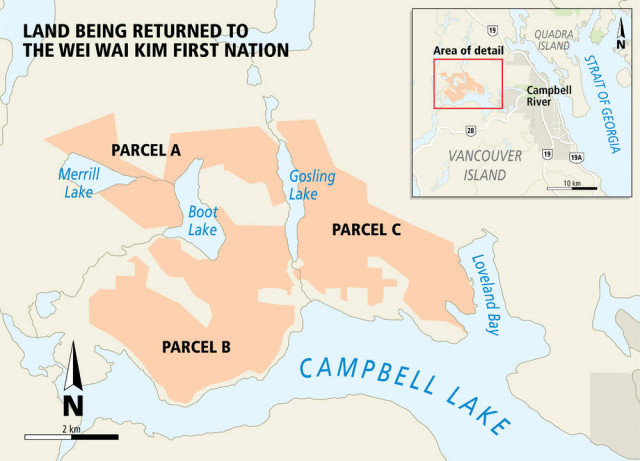 In a deal designed to improve the economic circumstances of the Wei Wai Kum First Nation, the province has signed over 2,276 hectares of land to the nation near Campbell River.

The transfer of traditional territory in an Incremental Treaty Agreement should help increase Wei Wai Kum First Nation’s participation in the ­forest industry while providing its citizens access to lands for cultural and harvesting ­activities.

“This agreement and transfer of land back to our nation is a significant milestone in the treaty negotiations process and ongoing journey of reconciliation,” said Chief Chris Roberts.

“It’s a strong sign of good faith from government on their commitment to supporting First Nations in reclaiming our lands and resources and restoring our positions as the beneficiaries from the values and gifts of our lands and those responsible for their enduring stewardship and sustainability.”

Roberts said the nation has been engaged in treaty negotiations for 25 years — too long to decide the question of land ownership and access to resources.

“We are now the rightful beneficial owners of these land parcels and will resume management and utilization in a sustainable manner that balances economic, environmental and recreational values,” he said.

There are also a small number of campsites at three locations within the parcels, which will be managed by Wei Wai Kum.

The province, federal government and Wei Wai Kum are in the final phases of treaty negotiations. The land transferred under the Incremental Treaty Agreement are an early benefit as the final treaty is negotiated.

The tripartite treaty negotiations have been underway since 1997, with Incremental Treaty Agreement discussions between the nation and B.C. regarding this specific land parcel ongoing since 2019.

“Treaties are one of the most important pathways to reconciliation,” said Murray Rankin, minister of indigenous relations and reconciliation.

“Wei Wai Kum and B.C. have made great strides and built trust while negotiating a final treaty, including ensuring the benefits of the treaty are able to flow to Wei Wai Kum more quickly through this ITA.

“This agreement supports a strong relationship with Wei Wai Kum in the future, advances Wei Wai Kum’s economic prosperity and returns significant lands to their use and benefit.”