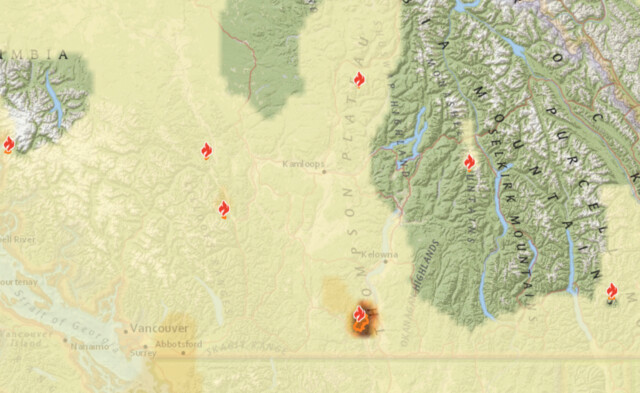 Environment Canada has ended the special air quality statement for the Thompson-Okanagan.

A news release from the provincial government and Interior Health states, “the Smoky Skies Bulletin that was last updated on August 11, 2022, has ended. Wildfire smoke concentrations have reduced over the past 24 hours.”

Weather conditions have now improved enough that the bulletin and advisory has been cancelled.

Residents in the Southern Interior of British Columbia can expect more smoke in the skies.

The South, Central and northern parts of the Interior will be impacted by wildfire smoke over the next 24 to 48 hours.

“The Southern Interior continues to be impacted by widespread smoke. Thunderstorms and convection today may clear the smoke, but may also lead to new fire activity,” states Environment Canada.

Much of the Southern Interior has been under a smoky skies bulletin since Wednesday and the area was expanded on Thursday. The website Firesmoke.ca tracks smoke from wildfires as it moves across the continent.

Unstable weather conditions across the Interior this week are expected to keep the smoke from nearby wildfires relatively light in the Okanagan, but a ridge of high pressure is forecast to return to B.C. next week. High-pressure ridges can trap smoke in the valley bottom.