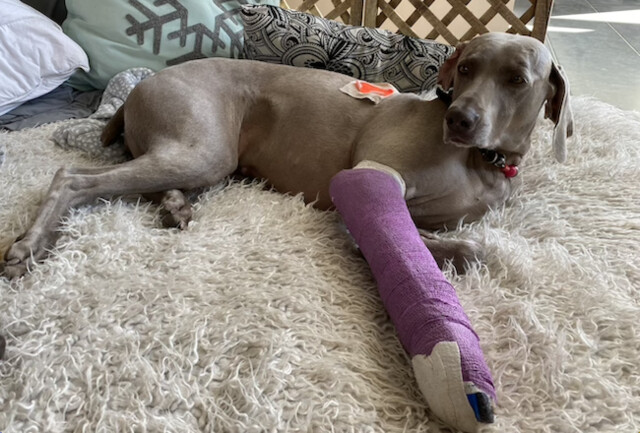 A Lake Country woman is giving a heads up to other dog owners after her pet suffered a bad injury at a Vernon dog park.

Stefanie Miller says she took her two dogs to the off-leash park along the creek at Marshall Fields on Aug. 4, and that's when Izzie the Weimaraner stepped in what Miller believes was a marmot hole and broke her leg.

"The dogs were having the time of their lives ... it's an absolutely gorgeous place," says Miller.

"All of a sudden, Izzie went down howling."

Miller says the seven-year-old dog suffered a complicated break involving several bones in its right front wrist and to one of the long bones in its leg.

Miller immediately took her pet to the emergency veterinarian on duty, the leg was set in a cast with surgery to follow, then rehab.

Miller says she is "barely affording it," but mostly wants to warn other pet owners to beware of the hazard.

She has reached out to the City of Vernon, and says "if they are providing a safe space for dogs, they should fill in the holes or whatever they need to do."

"I don't want anyone else to have this happen," she added.

Meanwhile, Izzie will be in a splint for three months following surgery that requires a bone graft and then another month of rehabilitation.

She said she was shocked to learn from another dog walker at the park that hers was the second dog that week to have fractured its leg.

"We are struggling to try to find the funds to support our beautiful otherwise healthy girl," she said.

"I do not want anyone else to suffer the same fate."