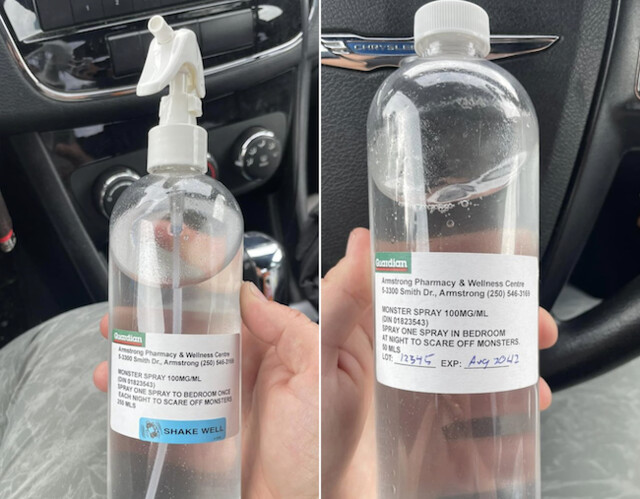 A young Armstrong boy has some professional help in keeping away those scary monsters that lurk under the bed.

Mom Meg Pearson had nothing but gratitude for pharmacist Jason Buerfeind of Armstrong Pharmacy and Wellness Centre after he whipped up a batch of extra strength "Monster Spray" for her five-year-old son, Declan.

"Thank you endlessly for making my son a bottle and refill of monster spray. I appreciate you more than words can say," Pearson wrote on the Armstrong Community Information Facebook group.

"Spray one spray to bedroom once each night to scare off monsters," the label on the spray reads.

Photos of the placebo sleep aid tugged on the heartstrings of locals, with Pearson's post garnering over 500 reactions and dozens of comments.

Comments on the post range from "that is the coolest ever" to "that is so awesome."

The pharmacist replied: "Thanks so much meg for the appreciative post! And thanks to everyone else for the comments and support!

"You had such a great idea, there was no way I wouldn't make that up for you. Plus, I got to use up that expired 'sulfuric acid' that I didn't know how to dispose of because of 'safety concerns.' That's what I call a win-win lol. Just kidding – it's just distilled water with a bit of aromatic oil in it for a nice smell."

Buerfeind says to let him know if the mint or lavender scent works best for scaring off monsters.