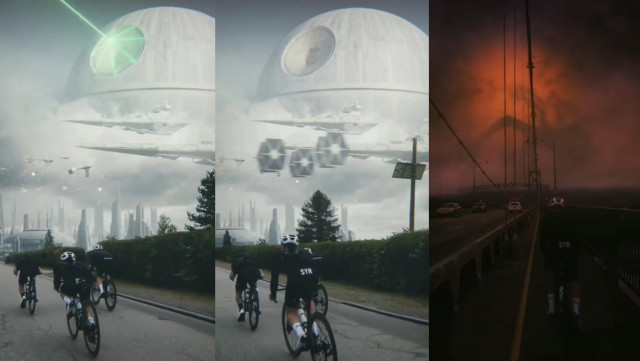 What do you get when you have a special effects artist who loves cycling and has some time to be creative?

Well, probably lots of different things, but in this case, it's a pair of pop culture cross-over videos featuring cyclists in Vancouver.

Calvin Hui, who works in Vancouver's VFX industry and is a passionate cyclist, brought the two worlds together.

In one case it's dropping the Upsidedown from Stranger Things over Lions Gate Bridge, as his cycling group rides over the iconic bridge towards the ghostly Mind Flayer in the distance. It even includes red lightning and whatever the white gunk is that always floats around in the parallel world.

"A lot of the stuff I've learned in the past was showcased in this video," says Hui, who was originally an architectural designer before moving over to special effects.

He custom-made most of the elements he says, before dropping the theme song in to bring it all together.

"With Strangers Things there's a defined look to it, and with social media you've only got 10-15 seconds," Hui says of his creative process.

His second video dropped Vancouver cyclists into an even more famous world. As Hui and his group travel one road, instead of Metro Vancouver in the background a Death Star hangs in the sky while Star Destroyers drop out of hyperspace into a battle with Rebel ships. A group of TIE fighters zip by before the giant space station that's definitely not a moon prepares to fire its Super Blaster 920 laser cannons (yes, that's the real name).

The inspiration for the videos came from his cycling group at Veloholics shop, Hui says, which includes Vancouver Is Awesome cycling columnist Brian Lim, group leader Drew Ross and Vuong Ngyuen, who shoots the original footage.

"I think the original video I created, it was an idea Brian had actually," Hui says, explaining that Lim originally suggested just a red sky to make it look like they were cycling through the Upsidedown.

Star Wars followed from another chat with Lim.

The videos help showcase cycling and the community around the sport as well, Hui says.

More could follow he says, including a potentially Marvel-themed one. And they'll always include cycling.

"I think I'm going to keep going, obviously there's some exposure to it," Hui says. "I think people do want that kind of inspiration at the day."