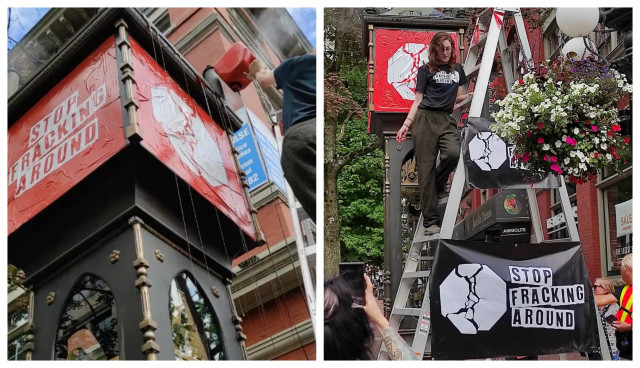 A protester climbed up a ladder Wednesday and poured molasses over the Gastown Steam Clock as part of an anti-fracking demonstration.

Stop Fracking Around, a new civil disobedience group, launched its anti-fracking campaign in Vancouver, pouring molasses over the tourist attraction at the corner of Cambie and Water Street.

The group says the thick syrup represented "fracked oil" and the demonstration would "possibly involve arrests" for its "non-violent civil disobedience."

Activist Brent Eichler, formerly of Extinction Rebellion's Vancouver chapter and the Save Old Growth campaigns, said: "We want the people who are flying here from all over the world to see the demonstration."

While some of the protesters were Extinction Rebellion members or were part of the Save Old Growth campaign, Eichler underscored that this is a "brand new group" that is specifically trying to get the Canadian government to end fracking, including the "immediate cancellation" of the Coastal Gaslink Pipeline.

"It's just not something that can be done anymore," he emphasized.

Stop Fracking Around is planning another rally on Aug. 15 at 9 a.m. at City Hall, where they will be joined by members of the Wet'suwet'en First Nation for a larger demonstration that will likely involve blocking intersections and bridges.

"That's what we need to do at this time," Eichler said, noting that many of the group members have already been arrested multiple times and some of them, including himself, are on probation; other members are currently serving jail time.