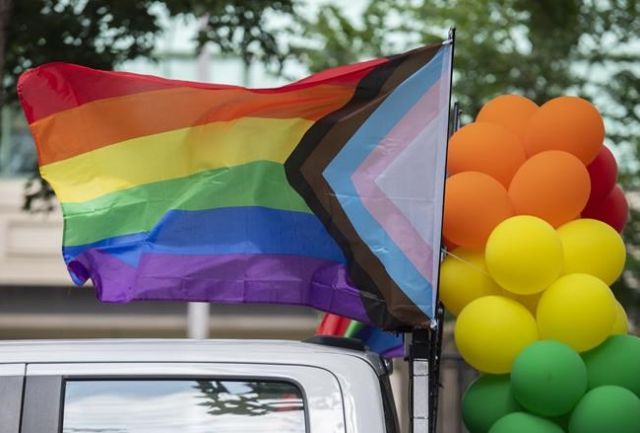 Photo: The Canadian Press
Rainbow flags and coloured balloons are shown at the site where the Montreal Pride parade was supposed to start from in Montreal, Sunday, August 7, 2022. Festival organizers cancelled the parade over concerns for security due to the lack of staff. THE CANADIAN PRESS/Graham Hughes

Pride Montreal abruptly cancelled its iconic annual parade hours before it was to get underway on Sunday, citing security concerns stemming from a lack of volunteers for the event.

Festival Executive Director Simon Gamache said the march, which was to cap days of celebration of LGBTQ+ communities and which had been scheduled for Sunday afternoon, would not have been able to proceed safely.

"We were missing more than 80 people this morning, it's a lot," Gamache said in an interview, adding the absentees represented more than a third of the number needed for the parade to go ahead.

Montreal's Pride Parade has been celebrating the progress of LGBTQ+ rights, diversity and inclusion for the last 40 years, and thousands of people were expected to march through the downtown core on Sunday.

Pride Montreal issued a statement on Twitter, saying it made the decision with the support of city police because there were not enough volunteers to ensure safety along the parade route.

Montreal Mayor Valérie Plante said on Sunday she was shocked to learn of the cancellation, calling the event "the most important LGBTQ2IA+ event in North America."

"I will not hide my surprise and my dissatisfaction to learn in the newspaper this morning that it wouldn't take place, a few hours from the start," she said at a news conference. "If we had been aware of a lack of manpower, or even anything, we would have put the necessary energy."

Gamache said this year's Pride festival fell prey to the kind of labour shortages currently plaguing numerous sectors in Quebec and beyond. He also said COVID-19 cases were reported among the volunteers in the last few days, in addition to heatstroke and heavy fatigue.

"Yesterday … we have the necessary resources, but it was very limited," he said.

Even though the event was cancelled, a few hundred people showed up at the initial rally point to celebrate diversity.

Montreal police escorted the attendees carrying the traditional rainbow flag and played music as they marched down the streets in an improvised parade.

Several marchers expressed their disappointment with the formal cancellation, but said they were still happy to see Sunday's event take another form.

"Of course it's disappointing," Suzie Guinard, a spokesperson for the LGBTQ+ advocacy group GRIS-Estrie, said in an interview.

Guinard, however, said she understands how difficult hiring staff can be given the ongoing labour shortage.

"Everybody is in the same boat, it's been very hard for everyone," Tanguay said. "But it really takes volunteers to be able to organize all these events."

Other planned festival activities went ahead as scheduled at the Olympic Park on Sunday afternoon. Gamache said another event might be organized to replace the parade.