Hot across the country 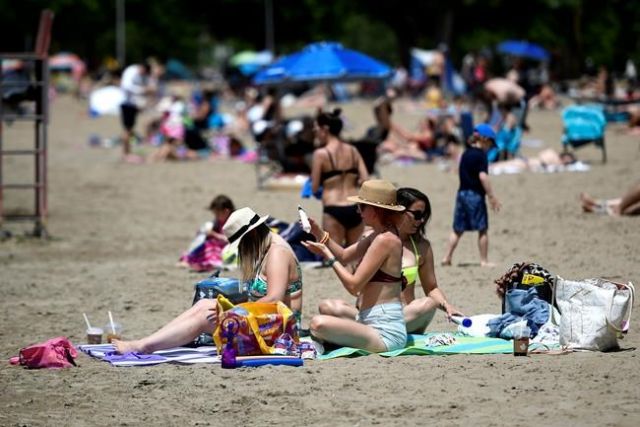 Five provinces across central and eastern Canada continued to swelter in unseasonably hot conditions on Sunday, Environment Canada said as it extended a widespread heat warning into a second day.

Monica Vaswani, a meteorologist with Environment Canada, says the size of the heat wave, while notable, is not unprecedented.

"When we do get heat events it’s basically due to warm air advections, or essentially an area of warm or hot air that's moving up from the south into northern parts -- the Canadian provinces," she said in a telephone interview. "It's not uncommon to see large swaths of that hot, moist air mass."

Environment Canada says maximum temperatures are expected to reach or surpass 30 C and hit the low forties when combined with humidity.

Humid conditions are expected to be even more prevalent in the Atlantic provinces, Vaswani said.

"It would definitely be more humid in the maritime provinces because of the additional moisture provided by the ocean," she said.

Sunday's forecast from Environment Canada called for overnight temperatures in the low to mid-twenties, offering little relief from the daytime heat.

Cooler temperatures are forecast for Monday, although parts of Nova Scotia could continue to feel the overwhelming heat well into the day.

On the other side of the country, part of the British Columbia interior is also in the midst of a hot stretch that is expected to last until Tuesday. A heat warning is currently in place for the Fraser Canyon and Central Coast regions.

And this is likely not the last of the heat events, at least not for Ontario, Vaswani noted.

"Some indications are suggesting that temperatures throughout the remainder of the month of August, aside from the coming week, may be slightly above normal, so that would indicate the potential for additional heat events to occur before the summer’s over," she said.

During these extremely hot and humid periods, residents are advised to watch for signs of heat illness such as swelling, cramps and fainting, and to drink plenty of water, stay in a cool place and check on older family, friends and neighbours.

"Given the trend that we’ve seen over the last couple of years, it does seem that our summers are generally starting a little bit later and lingering into at least September, even mid- to late-September, so I wouldn’t be surprised if we see something similar this year," she said.