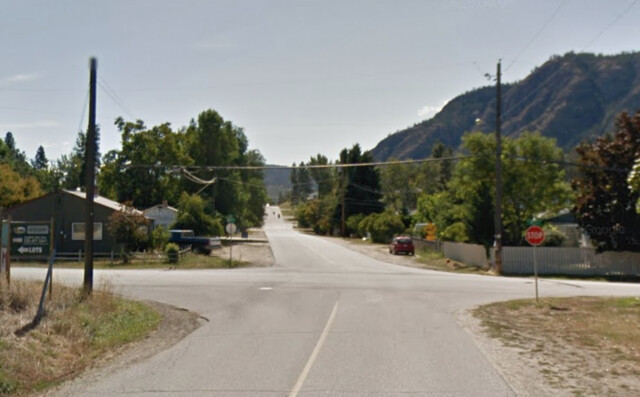 Photo: Google Street View
The shooting occurred near the intersection of Maple Street and 10 Ave.

Police have now confirmed a woman was shot and seriously injured in Okanagan Falls Saturday night.

A press release from the BC RCMP states police were called to the small community at about 10 p.m. for reports of gunshots.

"Officers responded and located one female victim suffering from serious injuries who was transported to hospital," the press release states.

"With the assistance of the Southeast District Emergency Response Team a male suspect was located and taken into custody without incident."

Police believe the suspect and victim were known to each other.

One person is in custody after a shooting in Okanagan Falls Saturday night.

Details around the shooting remain scarce, but Cpl. Laurie Rock of the Penticton RCMP confirms police arrested one person following the shooting. Residents tell Castanet it occurred at about 10 p.m. near Maple Street and 10 Ave.

"I can comment that this was an isolated incident and we have one male in custody. No current threat or danger to the public at this time," Cpl. Rock said in a brief emailed statement.

She says the incident is still under investigation, and police will be releasing more detailed information about the shooting on Monday.

Castanet has received multiple unconfirmed reports that a person was injured in the shooting and taken to hospital.

There was a large police presence in Okanagan Falls Saturday night, after gunfire reportedly rang out in the small community.

Several residents in the area tell Castanet gunshots were fired near the corner of Maple Street and 10 Ave at about 10 p.m. Saturday night.

It's not clear if anyone was injured in the reported shooting, but police quickly swarmed the area. One resident says officers blocked Eastside Road at one point Saturday night, and they wouldn't let vehicles travel south into Okanagan Falls.

Castanet has reached out to the RCMP for more information about the shooting, as it's not known at this time if the RCMP made any arrests.

“Everybody's wondering what's going on, I don't know if they caught a guy or what,” one resident told Castanet. “Nobody knows if we've got a maniac running around.”