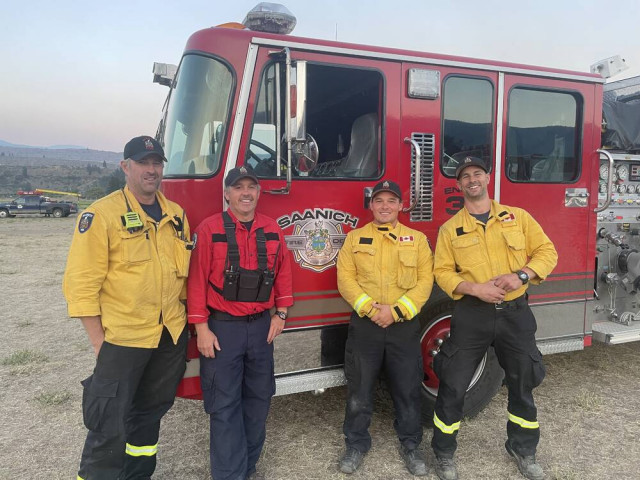 It’s getting dark as Craig Ford and a group of Island firefighters head back to base camp in Oliver in the south Okanagan.

They’ve just cleared forest fuels and performed other fire-prevention measures around residential and other buildings in Olalla, a small community near Penticton that had been evacuated as the Keremeos Creek Wildfire raged down a hillside.

Their 12-hour day — which started at Apex Ski Resort and with the call to Olalla — continues with a commute back to camp. Heavy smoke blankets parts of the highway and landscape.

The crews will have time to eat, shower and grab some sleep, before going out to wherever buildings and people are threatened by the fast-moving fires.

“We’re here to help defend structures,” said Ford, a Saanich firefighter who arrived Monday and will remain for an indefinite period. “That’s our primary focus.”

They’re focused on Apex Mountain Resort, where crews from city fire departments across B.C. have created what Apex general manager James Shalman describes as “the most extensive” sprinkler system the B.C. Wildfire Service has ever put in place.

The Keremeos wildfire, which started July 29, had grown to 5,903 hectares by Saturday and spurred evacuations.

The resort west of Penticton with dozens of homes and cabins was evacuated on Monday. Ford said firefighters have built a massive sprinkler system connected to large pools of water that are connected to roof ridge lines of homes and buildings to create “humidity bubbles.”

Ford said crews are also cleaning up brush and providing structure protection to outlying areas. As of Saturday afternoon, 547 properties were under evacuation orders and another 1,050 properties were on evacuation alert, according to the Regional District of Okanagan-­Similkameen.

Mikhail Elsay, a fire information officer for the B.C. Wildfire Service Fire, said that the increase was expected and crews were prepared for it.

“Crews are making good progress above Olalla putting in hand guards, so they’re doing a good job of creating containment lines,” he said.

Along with 15 helicopters and 40 pieces of heavy equipment, there are 260 wildland firefighters assigned to the Keremeos Creek fire, along with 166 structural protection personnel from fire departments across B.C.

Ford said the Island crews are proud to play a role during forest fire season. He said local departments have to calculate the risks involved with sending firefighters away from their home municipalities, but in some cases local departments have enough staff to afford lending people and equipment to the wildfire effort.

“If we left these areas to defend it for themselves, they just wouldn’t be able to. … These fires and the danger of these fires is so overwhelming,” Ford said. “With multiple departments lending these areas their resources and infrastructure, it makes it easier to defend.”

Victoria Deputy Fire Chief Dan Atkinson said Corby has “unique skills” in wildfire operations, because he used to work for the service in several roles, including as a “smoke jumper” parachuting into the fire zones to start attacks. He is serving as a task force commander in the South Okanagan.

But like several other municipal fire departments, Victoria’s contribution to forest-fire fighting this year is minimal as it deals with holiday time and leaves built up over the pandemic.

Deputy Chief Scott Davidson of Langford Fire Rescue said there are no immediate plans to send personnel to the front lines of the wildfires.

He said the department is working with “minimal staff” to cover off vacation times and leaves accumulated over the past several years. However, if the wildfire situation worsens, the department could consider supplying personnel.

Davidson said Langford has teamed up with View Royal and Colwood fire departments over the past couple of years to parse out personnel and resources so none of the municipalities find themselves short on the home front during wildfire season. But staffing have so far kept departments to protecting their local communities, he said.

“At this time, we’re short-staffed and we want to make sure that we can protect our area,” Davidson said.

“Seasonal and above-average” temperatures are in the forecast.

“Elevated fire danger is expected to shift from the northern portion of the province down to the south,” said Neal McLoughlin, superintendent of predictive services with the B.C. Wildfire Service. “Large fires that started in July will remain active into August, and additional growth can be expected on these fires.”

There were 57 active fires in the province as of Saturday.