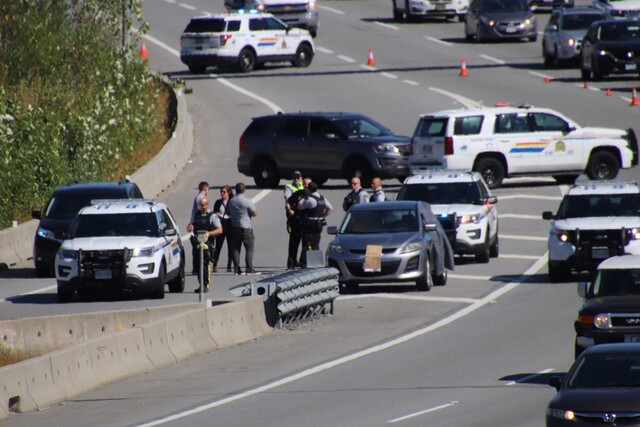 IHIT has identified the young man who died in the shooting to aid in the investigation.

18-year-old Meysam Zaki was the passenger in the vehicle that was targetted with gunfire along Highway 1 in Burnaby. Police say the driver, who was transported to the hospital with non-life-threatening injuries, will not be identified at this time.

“We are releasing Mr. Zaki’s name in hopes that witnesses will come forward who can assist us in building a timeline of his whereabouts in the time leading to his death,” says Sergeant Timothy Pierotti of IHIT. “Any associates of Mr. Zaki or the second victim are urged to speak with police. IHIT is committed to bring justice for this young man’s family.”

Homicide investigators were called to Burnaby Saturday afternoon after two men with bullet wounds ended up in a vehicle pulled over by the side of Highway 1.

Police responded to the Kensington exit at around 2:30 p.m. after one of the men called police, according to an RCMP news release.

One of the men has died of his injuries, while the other man is believed to have a non-life-threatening gunshot wound.

Police said the shooting is believed to be linked to the Lower Mainland gang conflict.

“Investigators are working to determine where the shooting happened and how far the vehicle with both victims inside travelled before the driver pulled over,” stated the release.

A vehicle found burning in an alley by Beecher Park in the Brentwood area is believed to be connected to the shooting.

Firefighters were called to the 1100 block of Eastlawn Ave. for a car on fire in the back alley at 2:39 p.m., according to assistant fire Chief Dan Walton.

The westbound Kensington exit from Highway 1 is expected to remain closed for several hours due to the ongoing investigation.

The Integrated Homicide Investigation Team is looking for dash-cam video from anyone traveling west on Highway 1 in Burnaby at around 2 to 3 p.m.

Anyone with information is asked to contact the IHIT information line at 1-877-551-IHIT (4448) or by email at [email protected].