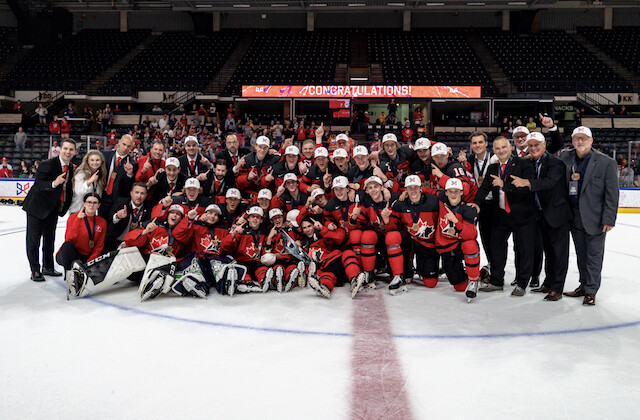 Kelowna Rockets forward Andrew Cristall and defenceman Caden Price have won gold with team Canada at the 2022 Hlinka Gretzky Cup after a 4-1 win over Sweden in the finals.

Anything less than first place would have been a let down for team Canada as they dominated the competition, outscoring their opponents by a whopping total of 34 goals for and just three goals against.

Canada got on the board first, just shy of the six-minute mark when Regina Pats forward Tanner Howe found room at the side of the net, lifting the puck into the goal from a sharp angle.

Sweden tied the game with 8:03 left to play in the opening frame, but Canada got the go ahead goal before the period closed out with a power play tally from Ethan Gauthier to make it 2-1.

Calum Ritchie and Brayden yager got the last two goals for Canada, sealing the deal on their first gold medal in four years.

Cristall (1 goal, 5 assists) and Price (1 goal, 4 assists) played in all five games, both finishing the tournament with a point per game or more.