Dog finds loving home after being shot and left for dead 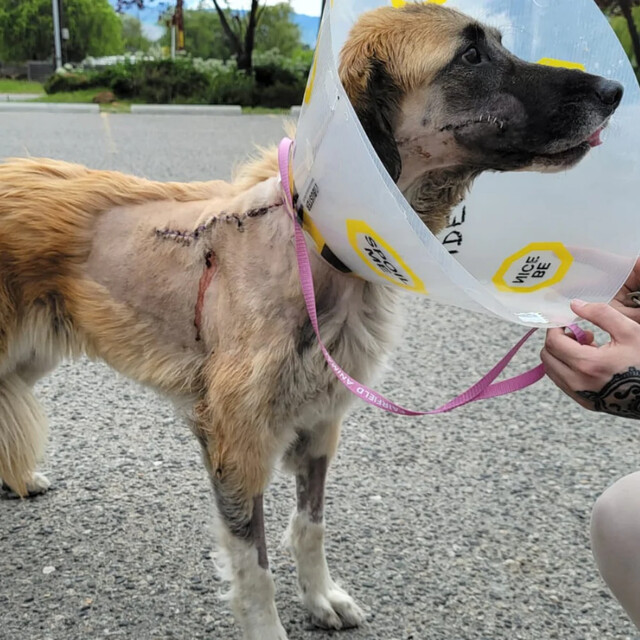 A dog that was shot and left for dead in Beaverdell, B.C. has found a loving new home after a lengthy recovery.

German shepherd cross Rose was found on a property in Beaverdell with wounds full of buckshot on May 20 after she and her brother were abandoned by their owner after he was evicted.

“When Rose arrived at the shelter her wounds were severe, infected, becoming necrotic, and she could barely eat or drink,” says Sean Hogan, manager, Kelowna BC SPCA. “We immediately got her to an emergency veterinary hospital where they made her more comfortable and began attending to her wounds.”

Rose required multiple surgeries and 24-hour care to keep her alive. When she was released from hospital, she was sent to a foster home to heal.

“She was very shy and startled easily when she first arrived, but that is to be expected after all she has been through.”

Her recovery was long and required five more trips back to the vet to deal with abscesses in her wounds. The last of her sutures and staples were removed on June 22.

She required six pills of medication a day, but Wendy says “she would just open her mouth and swallow the pill. She was so good.”

Once Rose started to play, Wendy realized the canine was feeling better.

“When Rose first got here she wasn’t interested in toys and playing at all,” says Wendy. “Watching her play warmed my heart.”

The SPCA then found Rose a forever home. 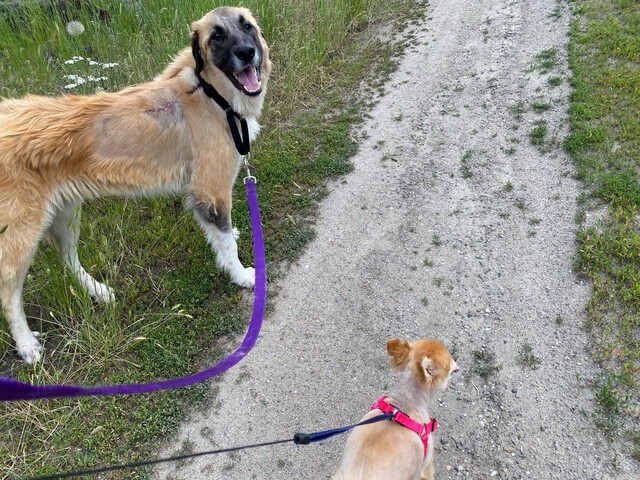 “We have only had her in our home for four days and it is unbelievable how far she has come already,” says Gwen, Rose’s new adopted mom.

“When we met her at the shelter her legs were shaking so badly that when we got her into our car, my husband D’Arcy stayed with her for the three-and-a-half-hour trip home to make her feel more comfortable. She settled down quite quickly, at about the fifteen-minute mark in the journey.”

“It is hard to see an animal who is dealing with trauma,” says Gwen. “We were wondering why she wouldn’t eat anything, so I set up a bed for her on the floor in our bedroom and kept an eye on her. In the middle of the night she went down to the kitchen where we keep her food and water and finally ate.”

“We see this behaviour with undersocialized, and fearful dogs regularly,” says Kim Monteith, BC SPCA’s manager of animal welfare. “They’re so afraid of humans, their new environment, or sounds, they don’t eat or move. It can be even worse when they’ve experienced a traumatic event like being shot.”

Monteith says that dogs like Rose need to learn to trust humans, know they’re safe, feel safe, and when they do they will start to eat around humans, play and just be a dog.

Rose spends a lot of her time sitting on their large deck, which is twenty feet up off the ground, surveying the property. Gwen says she was encouraged to see Rose bound up to her when she came outside to sit with her one day. “She looked just like a big praying mantis with her really long legs, as she came up to greet me,” says Gwen.

Gwen and Rose’s foster Wendy have been in contact since they adopted her. “She has been such an amazing help for us,” says Gwen.

“We can reach out to her to talk about some of Rose’s behaviour, if she had witnessed it, what worked while she was taking care of her. I think we have emailed back and forth more than fifteen times.”

Gwen says that they call her Rose Beauty.

The ‘beauty’ part comes from Anna Sewell’s book Black Beauty and now that they have seen her galloping around them with her lovely long legs, it seems so fitting. “We kept Rose because we want to honour her original name and all of the people who helped her,” Gwen says.

“She might just get a little spoiled with us. After all she has been through, we want to give her the best life ever.” 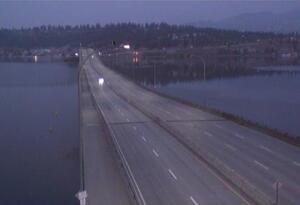