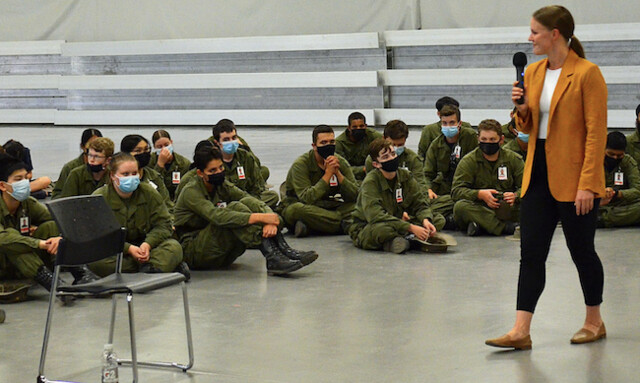 Cadets enrolled in courses at the camp were treated to a lesson on the history of the centre from military historian Megan Hamilton.

Hamilton, a former national-level rhythmic gymnast, presented the cadets with a quick overview of the Second World War and the roles Canada played from a separate declaration of war to sending equipment, food and funding to Britain.

She then went on to describe the history of the Vernon Military Camp, from its beginnings in 1912 when it was a tented encampment, to the building of barracks, garages, kitchens and storage buildings in 1942.

Using vintage photos, Hamilton described the training soldiers undertook, including the development and use of the Battle Drill School at Coldstream Ranch.

“The conditions were harsh,” she said. “The soldiers slogged through mud and trenches that often included animal organs and blood while live rounds were fired close to them.”

At the time, Vernon had a population of about 7,000 – and at times the camp’s numbers exceeded the city’s.

She said the city supported the soldiers with dances and other social events.

“Women played a large role in giving the soldiers breaks from the training,” she said.

After the war ended, many of the buildings, the traditional H-Huts, were dismantled and repurposed in what became known as the 'Hundred Homes' neighbourhood on the East Hill.

Hamilton has just been accepted as a PhD candidate in Britain and will soon be moving to London to continue her studies in military history.

She will also be making presentations at the Armstrong Museum Aug. 18 at 1 p.m. and the Okanagan Military Museum in Kelowna on Aug. 13 at 2 p.m.