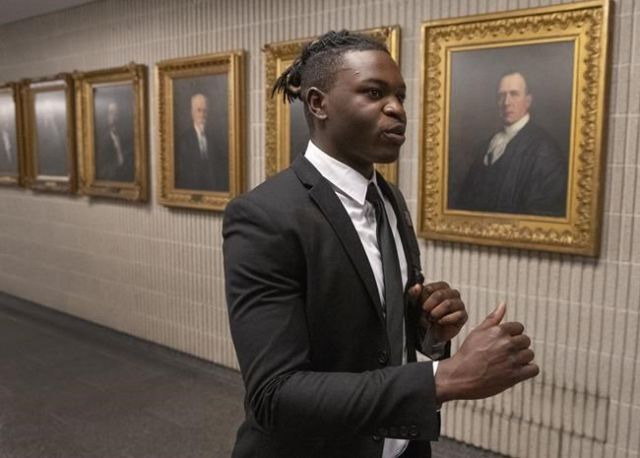 Photo: The Canadian Press
Joseph-Christopher Luamba arrives for court challenge in May.

The power of police to randomly pull over drivers remains an important tool for deterring dangerous behaviour on the road, a Quebec government lawyer argued Wednesday during a constitutional challenge to traffic stops.

Michel Déom told Superior Court Justice Michel Yergeau that the problem isn't the power itself but its abuse by some police officers.

Déom delivered his closing arguments in a case brought by a Black Montreal resident and the Canadian Civil Liberties Association, who say random police stops violate equality rights guaranteed under the Canadian Charter of Rights and Freedoms.

"The problem is the behaviour of police officers who overstep their powers," Déom said, adding that it's up to police agencies and watchdog organizations, like the police ethics board, to fight racial profiling by officers.

Joseph-Christopher Luamba, a Black Montreal resident who said he was stopped by police nearly a dozen times without reason, and the civil rights group are challenging the power of Canadian police to stop drivers without a reasonable suspicion an offence was committed. The two plaintiffs, however, are not challenging structured police traffic operations, such as drunk-driving checkpoints.

Bruce W. Johnston, the lawyer for the civil liberties association, argued that allowing police to make random traffic stops opens the door to the arbitrary and discriminatory use of state power.

"This power is not used randomly, but rather in a manner that is discriminatory and highly prejudicial to Black and racialized people, particularly Black men," Johnston and his colleague Lex Gill wrote in a summary of their oral arguments.

On Monday, Johnston told the court that police witnesses called by the government testified that racial profiling doesn't help police work, which he said indicates the power isn't needed. On Tuesday, he said, “When we know that this leads to a systemic violation of the rights of a group, we can’t close our eyes and say 'continue to use recourses that don’t work.'"

The Canadian Civil Liberties Association says that since random police stops disproportionately target Black drivers — particularly Black men — the argument that the stops are a reasonable limit on mobility rights should be reconsidered.

If Yergeau sides with the civil liberties group, he'll have to overturn a 1990 Supreme Court decision. In that case, the court ruled that police were justified when they issued a summons to an Ontario driver who had been stopped randomly and who had been driving with a suspended licence.

The high court ruled that random stops are the only way to determine whether drivers are properly licensed, whether a vehicle's seatbelts work and whether a driver is impaired.

"In my view the random stop is rationally connected and carefully designed to achieve safety on the highways," Justice Peter Cory wrote for the majority. Cory added that there must be a "real element of risk of detection" for drivers who get behind the wheel without a licence.

"Random stops supply the only effective deterrent," he wrote.

The Supreme Court found that police powers during random stops were appropriately limited to verifications related to road safety, such as asking for a driver's licence and proof of insurance, and that while police officers could take further steps if they have reasonable grounds, any abuses can be corrected by the courts.

Déom, who entered no new evidence about the dissuasive effect of random police stops, said it was the plaintiff's responsibility to prove that the Supreme Court's ruling on deterrence should be overruled.

Several police officers testified during the trial about the steps Quebec police forces are taking to fight racial profiling and increase diversity in their ranks.

At times, Yergeau challenged Déom about how long that will take.

He said it's clear that a segment of the population is targeted by police and that the testimony heard by the court — which included 11 Black people who had been the subject of random stops — was not anecdotal.

"How many generations will it take to ensure that the rights guaranteed by the Charter to Black people are respected while they're driving?" the judge asked.

The trial, which began May 30, is scheduled to end Thursday after the final day of closing arguments.