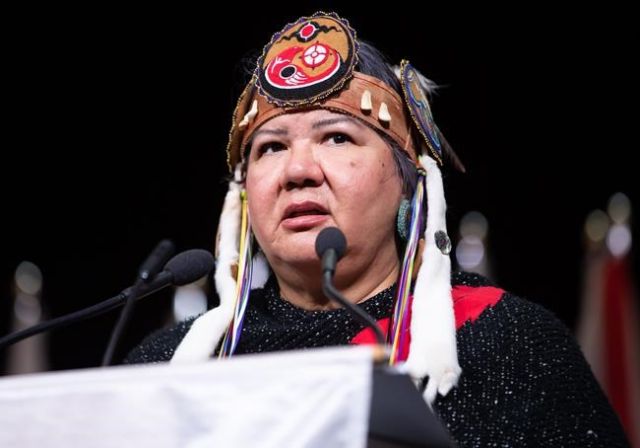 Photo: The Canadian Press
Assembly of First Nations National Chief RoseAnne Archibald speaks during the AFN annual general meeting, in Vancouver, on Tuesday, July 5, 2022. The AFN's executive committee and board of directors suspended Archibald last month pending the outcome of investigations into four complaints against her. THE CANADIAN PRESS/Darryl Dyck

Politics and disagreements around leadership at the annual gathering of the Assembly of First Nations are getting in the way of Indigenous topics that matter most, the group's youth council co-chair said Wednesday.

Fighting back tears, Rosalie LaBillois told delegates the youth council has been left to fend for itself on issues like child welfare as executives and National Chief RoseAnne Archibald dominate the discussion about her suspension.

"Every time you decide to squabble amongst yourselves, you forget the children and the young people that you once swore to protect," LaBillois said.

Chief Scott McLeod of the Nipissing First Nation in Ontario later approached the microphone to personally apologize to the youth council.

"I have heard you and I'm humbled by your words," he said.

The assembly's executives voted to suspend Archibald last month pending results of investigations into four complaints against her.

Much of the first day of the gathering was spent in speeches and debate about Archibald's suspension. A vote to reaffirm her suspension was defeated.

Archibald said she wanted to be reinstated, but that emergency resolution was dragged into Wednesday and then delayed further while the chiefs review the document changes.

Delegates are expected to debate an emergency resolution Thursday that calls for Archibald to be fully reinstated and an audit into potential information leaks within the AFN.

Archibald told delegates at the close of Wednesday's agenda that the leadership debate will lead to a "positive transformation."

"I want you to know that there is a path forward toward this evolutionary change that is needed in this organization, and I want to assure you that our moment has arrived," she said. "This meeting was that moment."

The assembly meeting's theme is “walking the healing path." It began the day after the AFN announced a $20-billion settlement to compensate First Nations children and their families over the harms caused by chronic underfunding of child welfare on reserves.

The deal must still be approved by the Canadian Human Rights Tribunal and Federal Court.

Regional Chief Cindy Woodhouse, the AFN's lead negotiator on the agreement, presented the settlement details to the assembly delegates Wednesday.

"This child welfare settlement is the culmination of the work of First Nations leaders and the AFN staff for over 20 years at least," she said.

She ended her address by thanking the youth council for their calls to focus on issues impacting First Nations children.

"Thank you to our youth council for their total commitment for a better future for all children and youth, and telling us what we need to hear," she said.