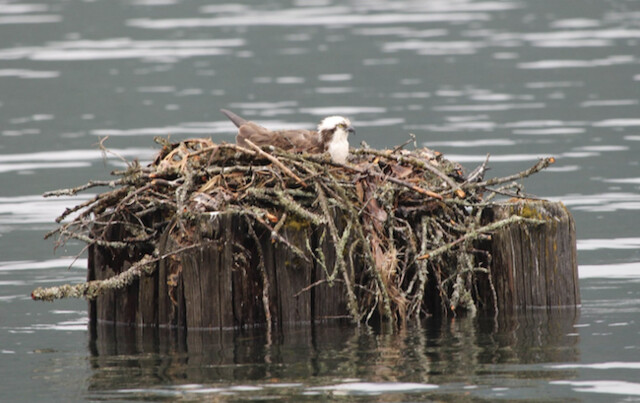 An osprey and her eggs are high and dry and safe and sound thanks to Conservation Officers and wildlife biologists.

Water levels on Kootenay Lake were rising to a point where an osprey nest was threatened with being swamped.

“The nest was close to being flooded and with the forecast calling for a further rise in water levels, it needed to be moved,” said a post on the BC Conservation Officer Service Facebook page.

The rescue unfolded in Kaslo Bay, and included Ministry of Forests wildlife bios, COs, a retired park ranger and a concerned citizen.

While rescuers approached in a COS boat, the mother osprey remained calm and watched the operation from a nearby tree.

“Very carefully, two eggs – which were secured in a warm cooler - and the nest were moved approximately 15 metres to a higher piling.”

Moments later, the mother Osprey returned to her newfound home.