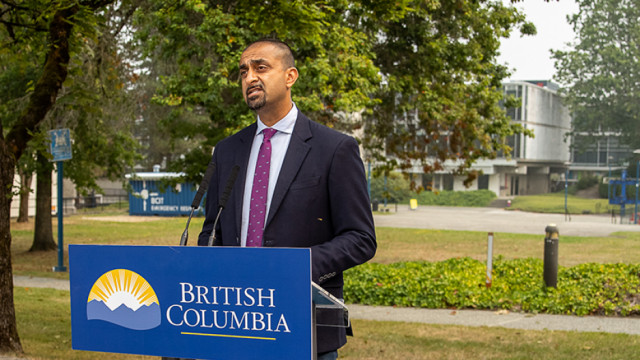 Photo: Submitted.
Ravi Kahlon, minister of Jobs, Economic Recovery and Innovation, says he will not seek the B.C. NDP leadership.

Ravi Kahlon, one of the BC NDP cabinet ministers identified by pundits as a potential replacement for Premier John Horgan, is saying thanks, but no thanks, and is throwing his support behind David Eby.

Horgan last week announced he will not seek re-election, which will prompt a leadership race to replace him.

Kahlon is among the candidates identified by pundits as a possible contender for the NDP leadership. But Kahlon said he does not plan to seek the leadership mantle.

“I want to thank everyone who reached out to provide words of encouragement as I considered seeking leadership of the BC New Democrats and premier of the Province of British Columbia," he said in a brief press release.

“After careful consideration with my family, we have come to the decision that now is not the time for us.

“Following this decision, I called my friend David Eby and encouraged him to seek the leadership. David is someone who I admire, someone with integrity, passion and is the right person to be our next premier and carry on the important work we are doing to build a stronger B.C.”

Eby is MLA for Vancouver-Point Grey and attorney general and minister responsible for housing. He is credited for a restructuring that has turned ICBC from a deficit-running "dumpster fire" to a financially stable Crown corporation with a surplus.