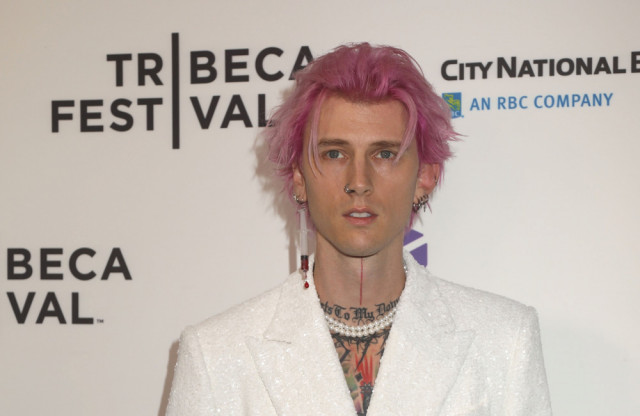 A helicopter carrying Machine Gun Kelly was hit by turbulence as he swooped in to his recent Detroit gig.

The 'Twin Flame' rocker was performing at Little Caesars Arena on Sunday night when the helicopter he hangs from on a ladder suffered some turbulence.

In a clip posted by a gig-goer to TikTok, MGK - whose real name is Colson Baker - said after the wobble: "Thank you, Lord, for keeping me alive."

The 'Dirt' star is currently on his mammoth 'Mainstream Sellout Tour' in support of the album of the same name.

The incident comes after the 'my ex's best friend' rapper was left bloodied by a champagne flute after trying to clink it in a toast.

The 32-year-old musician shouted “I don’t give a s***” before smashing the glass against his face during an after-party at Catch Steakhouse following his Madison Square Garden concert in New York City last Tuesday.

He later admitted he felt "like s***” after it left him with a gash above his eye.

Appearing on ‘Late Night with Seth Meyers' the following evening, a cut could still be seen above his eyebrow as he chatted with the 48-year-old host.

MGK told comedian Meyers he didn’t have a fork to make the traditional gesture of clinking it against the champagne flute, so he decided to smash the glass into his head to grab the crowd’s attention.

He said: “You know when you clink a champagne glass with a fork to kind of (get people’s attention)? Yeah, well, I didn’t have a fork, so I just clinked it on my head.”