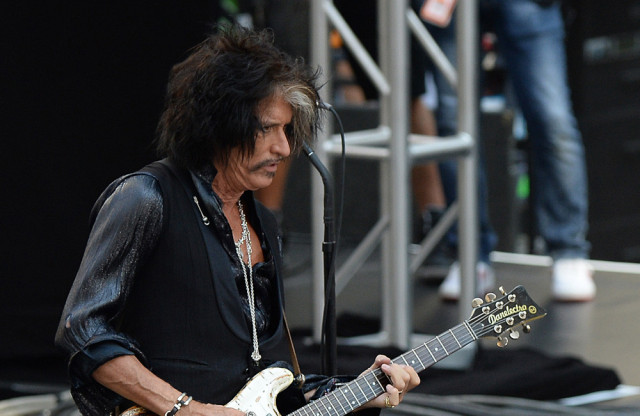 The KISS rocker, 72, continues to stand by his comments he first made in 2014, when he pronounced the genre deceased.

'Love in an Elevator' hitmaker Joe, however, says there are plenty of new rock 'n' roll bands "carrying the flag" and headlining big stages, despite not having chart success.

Speaking with Andrew Daly of VWMusic, Joe said: "No, not at all ... There are some great rock 'n' roll bands carrying the flag too, and one example is Brad's [Whitford, Aerosmith, guitarist] son Graham, who plays with Tyler Bryant and The Shakedown.

"I think they're like kicking a**, and the thing is, there's a lot of guys who want to get out there and play rock 'n' roll guitar and play that kind of music. The issue is that there aren't enough fans to hear it, so it's only going to go so far, but there are still people there for them to build a following.

"These new bands, they still headline places, they open up for other bands, and it's the same thing. It's not like they're at the top of the Billboard charts or like the top of the pop charts, but that's kind of how it was in the late '60s, too. All the rock 'n' roll that I liked, they didn't even have a place at the Grammys for it, and there was nothing overly commercial about it."

The 71-year-old guitarist believes it's the fans who keep rock alive.

He added: "I mean, I saw The Who in a small club playing 'Tommy'. It was only a club, but the place was packed, and it was still about the fans there who wanted to hear it. It's the same now; those fans are still there, and that's what's really keeping it alive."

He said: "I stand by my words: rock is dead. The people that killed it are fans.

"Fans killed the thing they loved by downloading and file sharing for free. How do you expect somebody who loves the guitar to come into this creative process? You’ve got to invent yourself. And so rock is dead."

Joe weighing on the debate comes after Black Sabbath's Tony Iommi had his say last year.