Patrick Brown fights back after being barred from Conservative leadership race 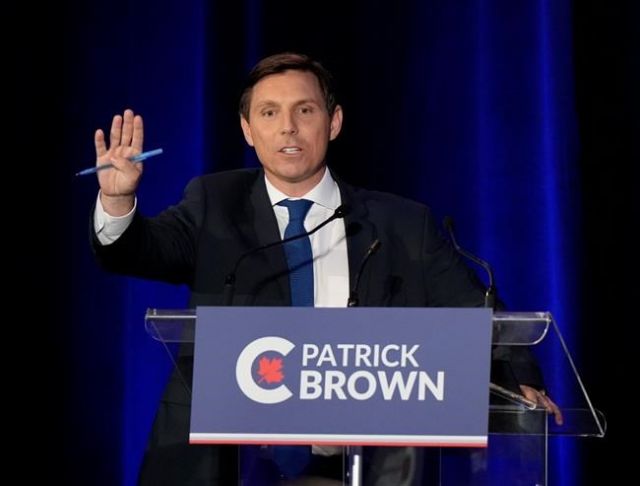 Patrick Brown's campaign is fighting back against what it calls anonymous allegations after the candidate was disqualified from the federal Conservative leadership race after ballots had already begun to be mailed out.

"This is reprehensible, undemocratic behaviour that breaks faith with hundreds of thousands of Canadians that embraced Patrick Brown's vision of a modern, inclusive Conservative party," his campaign said in a written statement early Wednesday morning.

"This is an indictment of the (Conservative Party of Canada), and a party that is not serious about winning a general election," the Brown campaign continued. "It is an embarrassment. But, not for us."

Ian Brodie, chair of the leadership election organizing committee, announced the surprising move late Tuesday night, saying the party had learned of "serious allegations of wrongdoing" by the Brown campaign.

The allegations are related to the financing rules in the Canada Elections Act, Brodie said in a written statement, but provided no further details.

In his statement, Brodie said the chief returning officer for the party informed Brown, who is the mayor of Brampton, Ont., of the concerns and requested a written response. He also decided to withhold the interim membership list from his campaign.

Brodie said the response from Brown's campaign did not satisfy the concerns and the chief returning officer recommended the leadership election organizing committee disqualify him, which it opted to do with a vote held at a meeting Tuesday evening.

Brodie said the party will be sharing what it has with Elections Canada.

He said both he and the party's chief returning officer did their best to be fair to Brown, who is a former leader of the Ontario Progressive Conservatives, and provide time to refute the allegations.

"None of these problems has any impact on the integrity of the vote itself," Brodie said.

"While we felt it important to provide a transparent response to party members about this matter, because this issue is now subject to further investigation, we will not be speaking further on the subject."

The Brown campaign disputed this characterization of the process.

"This decision is based on anonymous allegations. Our campaign was never provided with the full details or evidence of these allegations, failing an event basic requirement of due process," said its statement.

It accused the party of going on a "fishing expedition" and not giving the campaign "ample time" to respond, but said it "still complied with every bizarre request and unsubstantiated claim." It also said the campaign learned of the disqualification, and the meeting where the decision was made, through the media on Tuesday night.

The campaign said it is consulting its legal team.

The Brown campaign also accused the party of making this decision to favour Pierre Poilievre, the longtime Ottawa-area MP considered a front-runner in the race — and the main rival to Brown.

"The attempt to silence Canadians and skirt democratic values through this unfounded disqualification is the only way to ensure his victory was secured," the statement said.

As of late Tuesday night, the Poilievre campaign had not commented on the news.

The Conservatives will announce the winner of the leadership race in Ottawa on Sept. 10.

The other candidates in the race are Conservative MPs Leslyn Lewis and Scott Aitchison, as well as former Quebec premier Jean Charest and Roman Baber, a former Independent member of the Ontario legislature.

A spokesman for the party said Tuesday night that a large batch of ballot packages have already been sent to members in the mail.

Last week, the party said about 675,000 members have signed up to vote for a new leader of the Conservatives. The party described this as an unprecedented number for any federal political party.

The eligible voting base in 2020, when Erin O'Toole was elected leader, was about 270,000 members. At the beginning of this year, the party said it had 161,000 active and current members across Canada. About 48,000 of those were scheduled to expire by the membership deadline in June.