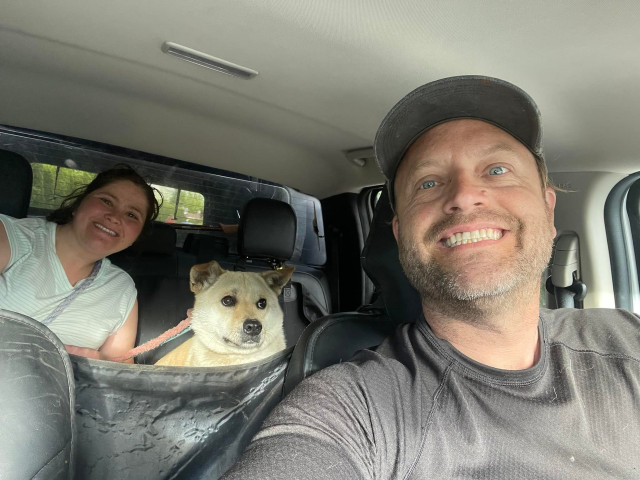 This is a story about how a dog got his name.

When he first landed at the Canadian airport after a lengthy trip across the Atlantic Ocean, a little rescue pup from China named Marco decided he could live his best life on the run. Little is known about his life before he set foot in Canada, but at the sight of the Sea to Sky wilderness he decided to throw caution to the wind and booked it towards freedom.

Over the next 45 days, this intrepid canine explorer led pursuers through the woods and over the bridges of Squamish, successfully crossing highways and busy roadways while repeatedly evading the multiple human beings trying to intervene. He found reliable sources of food in safe neighbourhoods, and established stomping grounds he judged to be safe, never letting anyone get near enough to grab ahold of him as he roamed across a 25-kilometre area.

The pursuers had never seen a craftier pooch. That's when they decided to change his name to reflect his obvious intellectual gift: Einstein.

"We have been searching for dogs for a long time, offering this service for Squamish and other communities, and we've successfully done hundreds of successful searches. Marco was the first of his kind," said Carlo Mearc, co-owner of Squamish's Canine Valley.

"He's extremely intelligent, very good at understanding human body language, and he seemed to understand how the human world works. We thought we would've caught him with certain traps, but he just wouldn't fall for them."

His co-owner Valley Calderoni marvelled at Marco aka Einstein's genius.

"That's why we call him Einstein — because he was just too smart for us. We had cameras set up to watch him interact with the traps. We could see him look into a trap, and really think about it, then decide to leave it. His thinking skills were really remarkable," she said.

"This isn't really the story of a lost dog because he wasn't lost. Once Marco got into certain neighborhoods he developed a pattern of safe places and he stayed there. We saw him on the trail cams walking around in the forest happily. He was having a great time."

Dogs are social creatures, though, and eventually Einstein began longing for contact from creatures of his kind. Canine Valley recorded their target approaching and interacting with people walking their dogs, friendly and playful but still evasive. They began leaving out food in the area, and put out a special 3.05 by 3.05 meter (10-foot by 10-foot) "Missy" trap that they'd custom-designed for this purpose. Mearc and Calderoni didn't want to use more harsh tactics because they were carefully building a relationship they didn't want to ruin. So they spread their scent around his favourite areas, encouraging him to associate their smell with safety and food.

"We had to be careful not to break his boundaries and to establish trust. Just days before we finally caught him, we realized we had a good connection with him and he would walk up and follow us. We successfully got on a rope on his neck three or four times, and every time something or somebody would spook him. He was so smart and fast he would get away," said Calderoni.

At this point, multiple non-profits and people all over Squamish were invested in bringing Einstein home. One of the people they worked with was Randi Olson of Neighbourhood Animals Needing Assistance (NANA). One morning she contacted Canine Valley to let them know that Marco was walking with her, and they asked her to lead him into their nearly finished trap — so that's what she did, closing the door behind her.

On June 30, Canine Valley announced the positive outcome on Facebook. It was met by a flood of well wishes by all the online obsevers who had been following the trek.

"We walked into the trap and took our time, [put] two leashes on him and brought him back to our centre. We did a walk around our entire facility so he can situate himself and he's now currently resting and taking things in. This afternoon he will have his first vet visit … but for the most part he's looking healthy and strong," it reads.

"What's next for [Einstein] is some amazing training and stabilizing him back from being a wild pup to a more relaxed state. We have agreed with the rescue agency that we will train him for at least two weeks and then find an amazing family for him in Squamish. And yes, the new family will be trained as well."