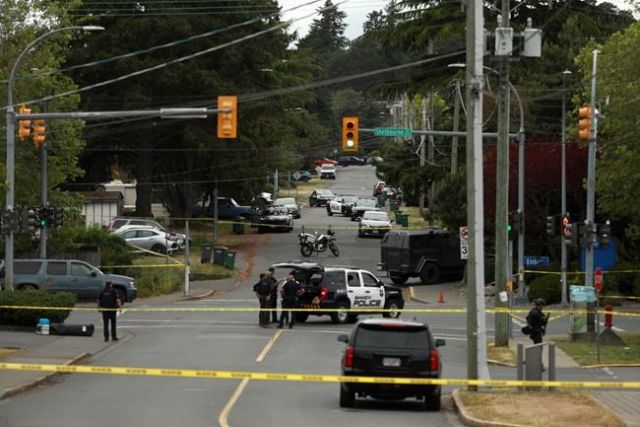 Photo: The Canadian Press
Saanich Police joined by Victoria Police and RCMP respond after a shootout outside a Bank of Montreal where two suspects were killed and six officers were injured in Saanich, B.C., on June 28, 2022. THE CANADIAN PRESS/Chad Hipolito

An officer who was injured in a deadly shootout outside a bank in Saanich, B.C., last week remains in intensive care after three surgeries.

Saanich Chief Const. Dean Duthie told a news conference that the officer, who has eight years of service with the department, has been showing signs of “improvement day by day."

Three Saanich officers and three from the Victoria Police Department, all members of the emergency response team, were injured in the gunfight with two heavily armed robbers outside a Bank of Montreal.

Duthie says another Saanich officer is stable and remains in hospital, while Victoria police said Sunday that one of their officers is still in care and faces a long recovery.

The chief says the injured officers and the department have been overwhelmed by an outpouring of public support.

RCMP have taken over the investigation into the bank robbery, where 22-year-old twins, Mathew and Isaac Auchterlonie from Duncan, B.C., were killed by police on June 28.