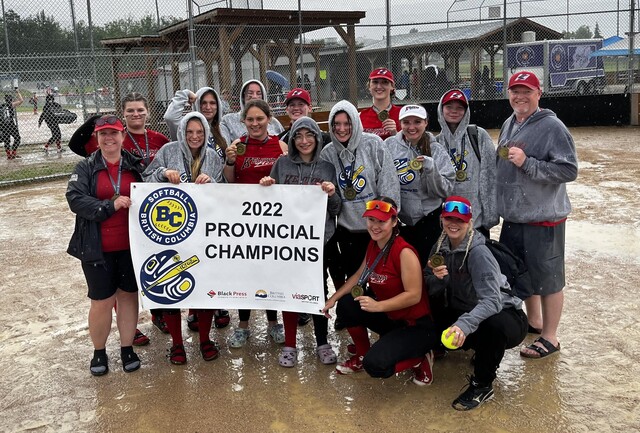 Thunderstorms brought an early halt to the Softball BC U20C Ladies provincial championship at High Noon Park in Kelowna last weekend, but in the end, the local team was named champions.

The Kelowna Heat went undefeated in seven games throughout the tournament that wrapped up Sunday, and were named winners of the gold division.

They were poised to play the gold medal game Sunday afternoon, but that’s when thunderstorms rolled in. The bronze game was suspended due to lightning, and then the rest of the tournament was scrubbed because torrential rain turned the field into a mucky mess.

“We waited for at least half an hour, but the rain wasn’t stopping and the fields were degrading. So they had to actually halt the tournament at that point.

“They awarded the medals based on the standings at that time, which Kelowna was the only undefeated team in the tournament. That’s why we were awarded the gold medals,” explained coach Leanne Foster.

Quesnel, which was leading the bronze game before it was suspended won silver, and Langley took the bronze.

This is a first for the U20C Heat because the division was just created for this season. Previously it was U19, but coach Leanne Foster says two of the girls wanted to keep playing, so they lobbied Softball BC to up the age limit, just like it had done in the men’s division.

The Heat won the silver division during the U19C 2021 provincials.