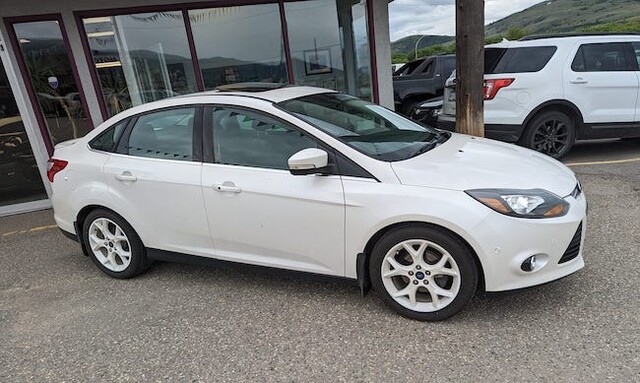 "I don't know what else we can do other than have an armed guard standing outside."

That's the thoughts of Swan Lake Motors owner Sid Skerritt after thieves smashed a window at the Vernon car dealership over the weekend, found the keys of the service vehicle, and took off with it.

Police say they were alerted to the theft Sunday morning after it was discovered by staff.

"Video surveillance at the location captured the incident, and shortly after 3 a.m, a suspect could be seen breaking into the business and taking a set of keys which were used to steal a 2013 white Ford Focus," Vernon RCMP spokesperson Const. Chris Terleski.

The vehicle has not yet been recovered, and police are continuing to investigate the incident.

Security video shows two men in a black SUV casing the dealership before one gets out and walks towards the windows.

While one man stays in the SUV, the other can be clearly seen wearing a face mask, grey hoodie and sweatpants.

Skerritt says the black SUV was also stolen, but not off his lot.

Swan Lake has endured "three or four" break and enters in recent years and another vehicle theft a couple of years ago.

The Ford Focus stolen over the weekend was the only vehicle on the lot not secured with a "club" device.

"It was our service vehicle and was parked right in front," says Skerritt, "so it wasn't clubbed ... coulda, woulda, shoulda, I guess."

As for increasing security, Skerritt says he "already did all that" last time around.