'Don’t tell the park board': Vancouverites roast city over campaign against drinking at beaches 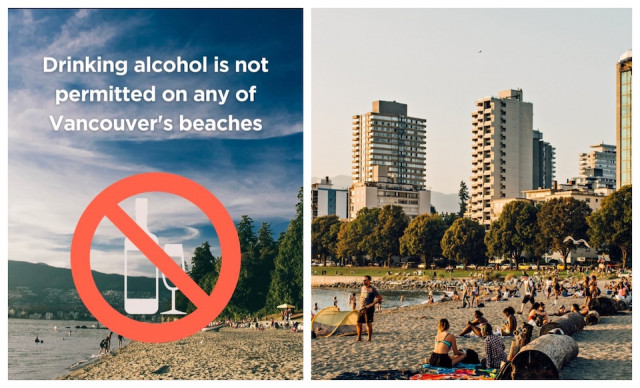 Vancouverites are expressing their frustration with the city's parks board over its messaging about alcohol consumption on beaches.

Ahead of the long weekend, the park board posted a video on its social media channels reminding people that drinking on beaches is not permitted. Park Board general manager Donnie Rosa underscored that "drinking and the ocean don't mix."

As an alternative, the park board noted in an Instagram post that alcohol is permitted in several parks, and included a link to them in its bio.

But the social campaign was met with fierce critique in the court of public opinion.

Not only did many people remark that drinking should be permitted on beaches in Vancouver, but many of them said they planned to do it anyway.

In fact, several individuals mocked the rules with one man tweeting, "challenge accepted." Another person writes: "I will be enjoying my bottle of peppermint schnapps while laying on a city beach this morning just like I do every Friday."

Numerous individuals mentioned that people use illegal substances in public across the city with little to no repercussions from law enforcement; other people noted that many places around the world permit alcohol consumption on beaches.

Kit Sauder, a member of the city's Renters’ Advisory Committee, shared a screenshot of a park board advertisement reminding people that drinking isn't permitted on beaches.

In a Twitter post, the East Vancouver resident wrote that the park board "is currently being mocked over this paid ad telling people not to drink at the beach" and that the city is "spending money on ads so that our institutions can be roasted."

In a subtweet, Sauder added that the park board "is not transparent, it isn’t accountable [and] it’s certainly not effective."

Vancouver city council candidate Peter Meiszner shared a photograph he snapped at the beach of his towel with a beer and a book. He playfully quipped, "don’t tell the Park Board."
Aside from the issue of drinking at beaches, many people are calling on the city to "abolish the park board" over a cornucopia of concerns.

A recent poll by Research Co. found that confidence in the park board has eroded significantly. In 2020, only 44 per cent of Vancouver voters were in favour of eliminating it and placing public parks and the public recreation system under the jurisdiction of city council. In June 2022, the proportion has risen by eight points to 52 per cent.