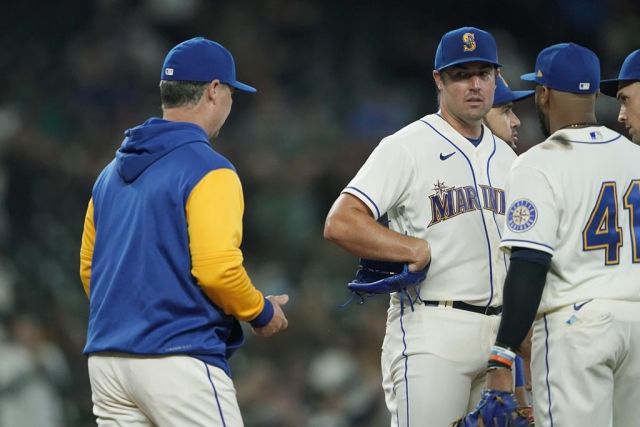 SEATTLE (AP) — Julio Rodríguez homered on Frankie Montas’ first pitch and drove in both runs, Robbie Ray struck out a season-high 12 and the Seattle Mariners beat Oakland 2-1 on Sunday to deal the Athletics their 25th loss in 31 games.

Ray (7-6) combined with Andrés Muñoz and Paul Sewald on a four-hitter and to strike out 16 batters. The A's are last in the major leagues with a .211 batting average and have the worst record in the big leagues at 26-55.

Ray reached 1,400 strikeouts by fanning Ramón Laureano and Christian Bethancourt back-to-back in the third inning and reached double digits for the fourth time this season. It was the 2021 AL Cy Young Award winner’s fifth straight quality start, helping the Mariners to their fifth win in six games and their 10th in the last 13.

He allowed a seventh-inning homer by Elvis Andrus on his 107th and final pitch, which stopped Ray's 18-inning scoreless streak.

Rodríguez home run on a sinker was the 12th first-pitch homer in Mariners history — nine were by Ichiro Suzuki.

Reliever Austin Pruitt retired 13 straight, striking out the side in the fourth and getting two more in the fifth. Dyan Moore singled with one out in the sixth and scoed on Rodríguez's double to the left-center gap for a 2-0 lead.

Muñoz struck out three in the eighth and Sewald pitched a perfect ninth, throwing a called third strike past pinch-hitter Stephen Vogt for his ninth save in 11 chances.

Ray became the second pitcher in Mariners history to allow three or fewer runs with 40 or more strikeouts over a five-game span. He joined Hall of Famer Randy Johnson, who did it from May 28 to June 19, 1997. Ray struck out 40 and walked nine dating to June 12, a stretch of 33 2/3 innings.

Mariners: OF/DH Kyle Lewis (concussion) was expected to start a rehab assignment as early as Sunday. Manager Scott Servais said the 2020 AL Rookie of the Year’s stay at Triple-A Tacoma will probably be lengthy as he recovers from a pitch that glanced off his head and continues to rehab from knee surgery. Lewis went on the seven-day concussion list on May 29. Servais said Lewis will get plenty of outfield work while in Tacoma. He was limited to the designated hitter role previously this season. ... 1B Ty France (left elbow strain) could rejoin the team as early as next weekend. … C Tom Murphy has returned to the team following shoulder surgery and will rehab in Seattle for the remainder of the season, Servais said. France is on the 60-day IL and out for the year.

Athletics: LHP Cole Irvin (2-6, 3.58 ERA) takes the mound as the A’s return to Oakland for a three-game series with Toronto on Monday. Irvin is still looking for his first win since returning from the IL on May 22. He is 0-5 in eight starts since.

Mariners: RHP Chris Flexen (4-8, 4.32) starts off the two-game series at San Diego on Monday. Flexen has eight starts of seven innings or more pitched while allowing one or fewer runs this season, second in the AL.