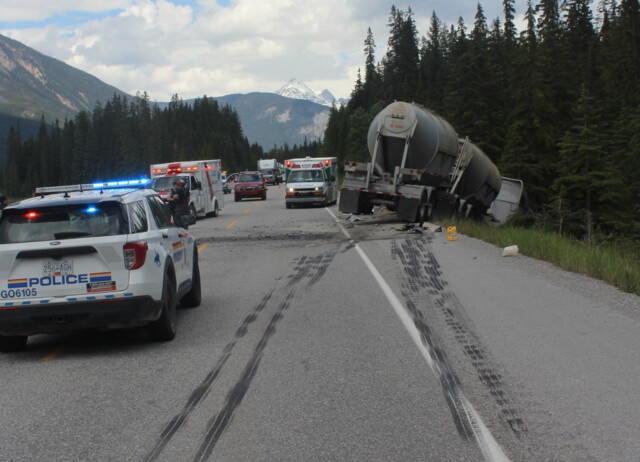 Photo: RCMP
The driver of the semi swerved into the eastbound ditch of Highway 1 west of Field to try to avoid the collision that killed a man from Alberta Saturday, July 2, 2022.

A crash that closed the Trans-Canada Highway for five hours on Saturday claimed the life of a man from Alberta.

The RCMP says the evidence at the scene suggested the passenger vehicle was heading westbound on Highway 1 when it drifted into oncoming traffic and collided head-on with a tractor-trailer. It happened in Yoho National Park, approximately 17 kilometres west of Field, B.C.

The driver of the semi swerved into the eastbound ditch to try to avoid the collision.

The 31-year-old Alberta man who was behind the wheel of the westbound automobile was pronounced dead at the scene. The truck driver was not injured.

“First and foremost, we and our partners extend our sincere condolences to the family and friends of the deceased party," said Const. Kat Robinson with the Golden-Field RCMP.

“We would also like to thank the citizens who were first on scene, who helped those involved in the motor vehicle incident, and who stayed to help emergency crews as they arrived — you were vital in today’s incident."

"To all those affected by the extended road closure, the Golden-Field RCMP would like to thank you for your patience and understanding," Robinson said.

"While they are a great inconvenience, road closures allow first responders the ability to conduct full, untainted investigations in a safe environment."

Mounties remind motorists that national parks are reaching their peak season, and drivers should allow themselves extra time to get to their destinations.