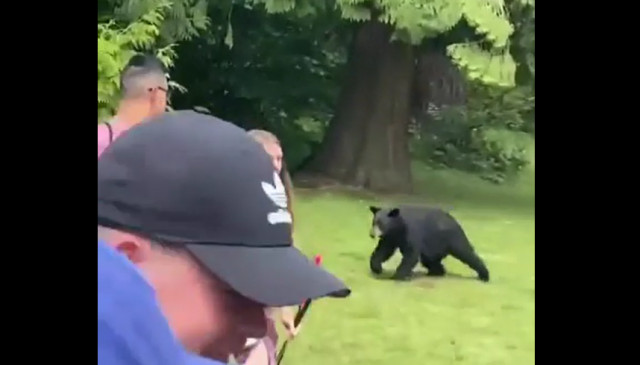 Photo: sexymariathrowaway/Reddit.
A bear chases a bird on the Central Park pitch and putt near a group playing on the course.

Warning: Some people may find the video disturbing.

Several people had a little more excitement than usual on Burnaby's Central Park's pitch and putt this weekend.

In a video posted on Reddit a black bear can be seen charging on the course, chasing a group of Canada geese through a group of people. As the bear runs through the area people scatter, though the bear seems intent on one goose, which appears to be a gosling.

The video ends when the bear catches it.

The video was shot over the Canada Day long weekend at the popular Burnaby park, which borders Vancouver. There have been no reports of anyone being attacked or injured by the bear while it was in the area.

A second video appears to show the same bear around the same time in Central Park, near Patterson Station. This video was taken July 2, around 2:30 p.m., according to Sebastian Plusa, who posted it online.

A group of people follow the bear in the park from a distance.

Vancouver Is Awesome has reached out to the Ministry of Environment to confirm whether the bear has been tranquilized and removed from the area.