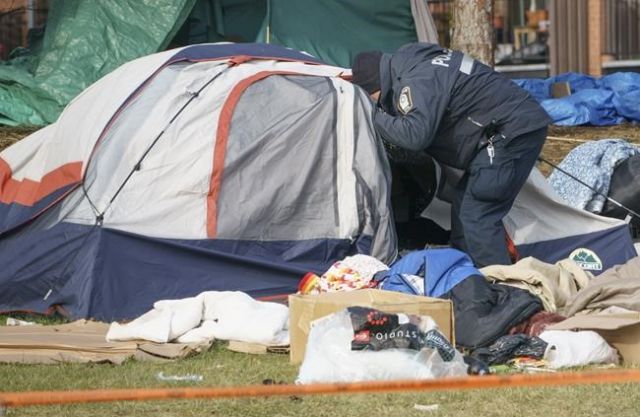 Photo: The Canadian Press
Parks Canada's decision to hold a series of events dubbed learn-to-camp in the heart of Montreal faced backlashes after groups working with people without a home called it a "double standard."

Parks Canada's decision to hold a series of events dubbed learn-to-camp in the heart of Montreal is facing backlash after groups working with people without a home said they represent a double standard.

The events, scheduled throughout the summer, are described as an opportunity to learn basic camping skills for the price of $108.75 per tent along the Lachine canal in the city's west end.

Annie Archambault, who works with a non-profit organization that helps Montreal's vulnerable populations, says the initiative comes off as a bad joke as the city's authorities frequently dismantle encampments for the homeless erected on public land.

She says Parks Canada lacked sensitivity in sending the message that public spaces are for people who can afford them.

Parks Canada issued a statement on its website cancelling the first event this weekend without providing a reason for the move, but the same events scheduled for July 23, Aug. 13, 20, and 27 are still open for registration.

Archambault says the remaining dates should be cancelled and the camping gear handed to groups that work with people without homes.