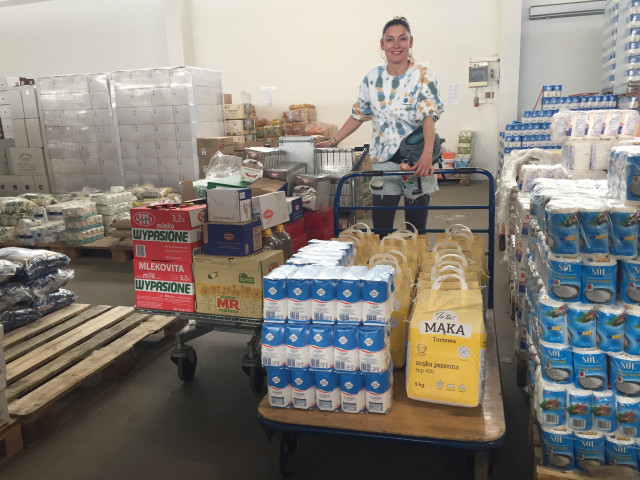 It was the first time Katerina Jezowiczova had been in her Whistler apartment in more than 10 weeks, and she couldn’t help but see her place in a newfound light.

“I got home last night, opened the door of my apartment and I couldn’t believe I had such a nice place. I have a flat screen TV,” she said. “I totally forgot about life here. I’m driving in my car and I’m so thankful of what I have and the people around me.”

Jezowiczova’s fresh perspective is well earned. The Czech native just got back from volunteering in Ukraine, a whirlwind two and a half months she spent lending a hand wherever it was needed most. She helped organize much-needed supplies in a Polish warehouse; she cleaned washrooms shared by 800 people at a support centre for displaced Ukrainians in the western city of Lviv; she helped at a military hospital in Cherkasy where she heard the heart-wrenching stories of soldiers injured on the frontlines of the largest conventional military attack since the Second World War.

So, why did a 35-year-old from the other side of the planet put her entire life on hold to volunteer in the middle of an active warzone?

“Mainly it was the feeling that this is not correct. This is not right,” Jezowiczova said. “A lot of people want to help but can’t because they work or have a family. I was in a position to just go.”

The Whistlerite first jumped into action in the weeks following Russia’s brazen late-February invasion, organizing an in-person fundraiser with some friends at the Whistler Racket Club that netted more than $7,000. She also raised more than $12,000 through a GoFundMe campaign that helped fund her on-the-ground efforts with humanitarian organizations such as World Central Kitchen and Poland’s Fundacja Folkowisko.

Jezowiczova also documented her efforts through an Instagram account, @support_brave_ukraine, to keep donors and well-wishers up to date during her time in Europe.

Actually connecting with the right people from abroad was no easy feat, but once she landed in Poland, Jezowiczova said her fortune started to turn.

“It was really difficult. Before you are actually on the ground, no one really wanted to talk to me about any details because I was too far away and I believe there are a lot of people who want to go and they get someone’s attention, and then nothing comes from it,” she said.

“It feels impossible to go and help when you’re so far away, but once things started rolling, I felt like luck was on my side. Things were just happening and people around me were helping to get me where I needed to be.”

Spending a few weeks in Lviv, Jezowiczova volunteered at a military hospital, but without any formal medical training, she helped prepare meals in the kitchen. One day she made fruit salad for an entire floor. Another she delivered books, crossword puzzles, cookies and flowers—anything to bring a little light into the Ukrainians’ lives.

“That was a beautiful day,” she recalled.

If there’s anything Jezowiczova wants Whistlerites to take away from her experience, it’s that the now four-month-long war isn’t going anywhere anytime soon. In fact, between Russian advances and a looming supply shortage, the situation is as dire as it has ever been.

“I really need people to know this is not going anywhere, even though it’s not at the top of the news anymore. It’s getting even worse because the supplies are going down and down—not enough food, gas, anything,” Jezowiczova said. “People here complain about the price of gas going up, but you know what? Be glad gas is actually there and you can take a full tank. We complain things are so expensive but we don’t realize we actually have the access to it. It’s just a shame it’s going off the radar because the war and struggle there is not going anywhere.”