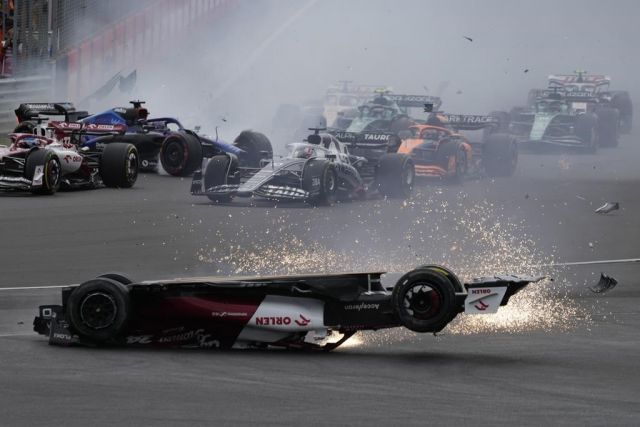 SILVERSTONE, England (AP) — Zhou Guanyu was involved in a frightening first-lap crash Sunday that brought the British Grand Prix to an immediate halt as safety crews attended to the only Chinese driver in Formula One.

Zhou's car slide upside-down across the gravel and his Alfa Romeo seemed to be wedged between fencing and a tire barrier at the first corner. The race was red-flagged and George Russell, one of the drivers involved in the crash, sprinted from his car to the tire barrier to check on Zhou.

Team manager Beat Zehnder told German broadcaster Sky Sport that Zhou was speaking and was being transported to the medical center at Silverstone.

Russell appeared to be hit from behind at the start and was knocked into Zhou, whose car went flying across a gravel trap and over a tire wall into the retaining fence. The car was skidding on the “halo” which protects the driver's head.

FIA, the governing body for F1, said Zhou and Williams driver Alexander Albon were being medically evaluated. Albon had spun into the pit wall.

“Both drivers were conscious and will be evaluated at the medical center. Further updates will be given in due course,” the FIA said.

The drivers returned to the pits to await a restart. No time for that has yet been announced.