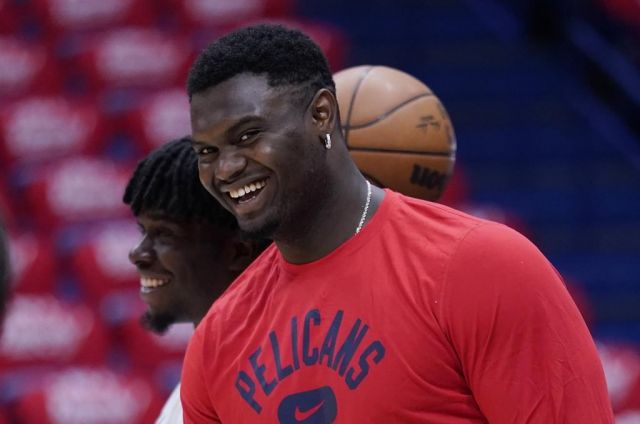 NEW ORLEANS (AP) — Zion Williamson’s lost season to injury and unusual absence from the New Orleans Pelicans during his recovery didn’t stop the club from betting big on their long-term future together.

Williamson agreed Saturday to a five-year, $193 million extension with New Orleans that has the potential to be worth as much as $231 million, two people familiar with the situation said.

The people spoke to The Associated Press on condition of anonymity because NBA rules do not allow the extension to become official until July 6.

Classified as a maximum rookie extension under the NBA's labor agreement, the deal sets the stage for the 6-foot-6, 280-pound, high-scoring forward to give an All-Star caliber boost to a squad that recently proved it could make the playoffs without him.

The move signifies a desire by the 2019 No. 1 overall draft choice out of Duke to see how much his return could help a squad that improved dramatically late last season and made a surprisingly competitive playoff showing.

It is also a show of faith by the Pelicans in the injury-plagued Williamson, who has played a grand total of 85 games in his first three NBA seasons — and missed all of last season with a foot injury.

This spring, New Orleans won two Western Conference play-in games before taking top-seeded Phoenix to six games in the first round of the 2022 playoffs. They did so with a squad led by high-scoring wing Brandon Ingram, veteran guard CJ McCollum, center Jonas Valanciunas and a supporting cast of young, hungry players who blossomed under first-time NBA head coach Willie Green.

One season earlier, Williamson averaged a team-high 27 points and became a first-time All-Star during what was his lone NBA campaign that was not mostly or entirely wiped out by injuries.

Williamson played in just 24 games as a rookie because of a preseason right knee injury (lateral meniscus).

He played in 61 of 72 games in his second season. But he hurt his foot during the 2021 offseason while performing basketball drills with his stepfather, with whom he had previously entrusted his offseason training.

The Pelicans didn’t reveal the injury until the first day of training camp in September, saying they hoped he’d be ready to play by the regular-season opener on Oct. 20. Williamson initially agreed with that timeline, which proved exceedingly optimistic. He wound up missing the entire regular season and playoffs.

Williamson also chose to spend a significant portion of the season away from New Orleans and the Pelicans. He chose to rehabilitate in Oregon, where his shoe sponsor, Nike, is based.

During that time, the Pelicans offered few updates on Williamson, any mention of whom was later conspicuously absent from Pelicans promotional material regarding season ticket renewals for the 2022-23 season.

No NBA player has declined a maximum extension of their rookie NBA contract, although the awkwardness between Williamson and the Pelicans led to speculation that Williamson might be the first.

But Williamson rejoined the team in March and appeared emotionally invested in its playoff run, routinely engaging in celebrations of triumphant moments near the bench.

And when the season ended, Williamson said if New Orleans offered a maximum extension, he “wouldn’t be able to sign it fast enough.”

“It was a different feel this year. You saw it on the court," said Williamson, who had a different coach in each of his first three NBA seasons. "We have a special group. I truly believe that.”

In late May, several weeks after the Pelicans season had ended, the club announced that Williamson had been cleared to engage in basketball activities without restrictions.

With Williamson sidelined and Green a rookie head coach, the Pelicans started 1-12 last season. But they steadily climbed into contention for a Western Conference postseason berth.

They had begun improving even before acquiring McCollum from Portland two days before the NBA trade deadline. McCollum helped them rally to clinch a ninth overall seed and a home play-in game.

The Pelicans defeated 10th-seeded San Antonio. They then won a second play-in game over the Clippers in Los Angeles to advance to the first round of the playoffs against top-seeded Phoenix

New Orleans won twice in that series, which was tied at 2 games apiece before the Suns closed it out with consecutive victories.