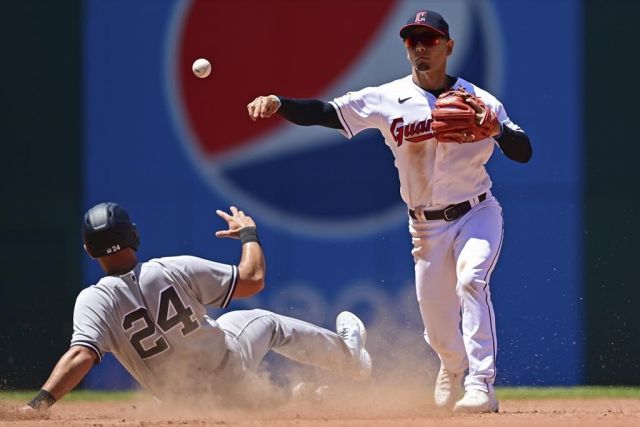 CLEVELAND (AP) — Gerrit Cole brushed off giving up back-to-back home runs and worked six strong innings, leading the New York Yankees to a 13-4 romp over the Cleveland Guardians in the first game of a split doubleheader on Saturday.

Cole (7-2) was tagged for consecutive homers in the second inning by Josh Naylor and Franmil Reyes before settling in. The right-hander allowed Cleveland just one other hit and struck out six.

Matt Carpenter homered twice — his second was off utilityman Ernie Clement in the ninth — and had four RBIs. DJ LeMahieu added a solo shot off rookie Kirk McCarty (0-2) for the Yankees.

Another humdrum win for the Yankees did have a hiccup. Reliever Aroldis Chapman’s first major league outing May 22 didn’t go well.

The left-hander, who was activated Friday after being sidelined with Achilles tendinitis, came in for Cole to start the seventh and walked three straight batters before being pulled by manager Aaron Boone after 19 pitches.

This is the sixth doubleheader for the rain-soaked Guardians, and what will be their third twinbill in less than a week with another scheduled for July 4 in Detroit. Cleveland split two with Minnesota on Tuesday.

LeMahieu triggered New York's four-run third with his eighth homer, a shot into the right-field seats.

McCarty then got himself into trouble with a pair of walks before Miguel Andújar, recalled as the 27th man for the doubleheader, delivered an RBI single and Aaron Hicks drove in two with a base hit to make it 4-2.

Naylor and Reyes connected for their homers in a four-pitch span off Cole in the third.

Naylor, who hit a dramatic walk-off to beat Minnesota in extra innings earlier this week, drove his 10th homer into the bullpen in center. Reyes followed with an opposite-field shot to right for his fifth.

The Yankees added four runs in the sixth on Carpenter's seventh homer and a two-run single by Gleyber Torres.

Boone enjoyed watching two members of the team's staff put on Aaron Judge and Anthony Rizzo's uniforms and perform headfirst slides across the infield tarp after Friday's game was called.

"It gained steam pretty quickly and then it turned into a fun team event,” said Boone, who didn't know the payout for the joke.

For the second time this week, Clement was brought in to relieve. After allowing Carpenter's shot, Trevino followed by connecting off the right-hander, who threw nothing but junk during his outing.

Guardians: Rookie OF Oscar Gonzalez was placed on the injured list with an intercostal (rib) strain. He didn't report any issues until Thursday and an MRI revealed the strain. Gonzalez will be shut down for at leas one week. ... RHP James Karinchak (shoulder strain) was activated from the 60-day IL and optioned to Triple-A Columbus. The Guardians were encouraged by two recent outings want him to be consistent.

Aaron Civale (2-4, 7.20 ERA) was scheduled to start Friday and the Guardians gave him the option of pitching either game. The right-hander was tagged for six runs in three innings against the Yankees on April 24. He'll face New York's Nestor Cortes (6-3, 2.51).